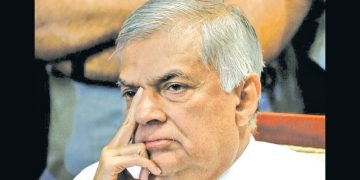 Petition filed in Court of Appeal to unseat Wickremesinghe from parliament

Petition filed in Court of Appeal to unseat Wickremesinghe from parliament Colombo, December 12 (Daily News): A writ petition was filed in the Court of Appeal on Tuesday seeking an order in the nature of a writ of quo warranto declaring that UNP leader Ranil Wickremesinghe be disqualified to be a Member of Parliament.

The petitioner alleged that first Respondent Ranil Wickremesinghe held, as at the time of the Parliamentary Elections held on August 17, 2015, a financial interest in several contracts entered into by public corporations on behalf of the Republic of Sri Lanka with his family company “Lake House Printers and Publishers PLC”, by virtue of his having been a major shareholder of the said company.

The petitioner stated that first respondent Ranil Wickremesinghe has been declared elected as a Member of Parliament from Colombo District at the Elections held in 2015, and to sit and vote in Parliament. The Petitioner states that the first Respondent’s election was illegal for the reasons set out below and is thus an usurper of the authority of a Member of Parliament and is not qualified to hold the office of an MP.

The Petitioner states that Article 91(1)(e) of the Constitution of the Republic bars individuals who hold any interest in public contracts from being elected as a Member of Parliament.

The Petitioner states that as held in Dilan Perera vs Rajitha Senaratne(2000 (2) SLR 79),that under prevailing law, Article 91(1)(e) of the Constitution disqualifies a person to be elected as a Member of Parliament or to sit and vote in Parliament” if he, directly or indirectly by himself or by any person on his behalf or for his use or benefit, holds, or enjoys any right or benefit under any contract made by or on behalf of the (Republic of Sri Lanka) in respect of the Government of the Island for the furnishing or providing of money to be remitted abroad or of goods or services to be used or employed in the service of the (Republic of Sri Lanka) in the Island.”

The Petitioner states that came across a cheque drawn on an account at the Bank of Ceylon. On the said cheque leaf, the petitioner noted the words “Lake House Printers and Publishers PLC Tel:2302139” printed vertically in small-point sans-serif typeface, implying that the cheque book from which the cheque was written was printed by the said Lake House Printers and Publishers PLC.The petitioner observed that the identical print was printed in cheque issued by the People’s Bank.

‘The first Respondent is described as a “Major shareholder’’ of Lake House Printers and Publishers PLC, in its Annual Reports issued for the years 2014, 2015, 2016, 2017 and 2018, each of which describe him as the ninth largest shareholder of the company, holding 38,964 shares of the company or 1.33% of the total outstanding shares, the petitioner said’.

She further said over 90% of the remaining shares of Lake House Printers and Publishers PLC are held in the name of close kin of the first Respondent Ranil Wickremesinghe.