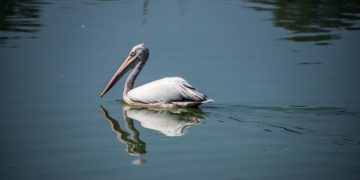 The lake is an ideal refuge for birds like the pelicans which need water bodies to survive in a concrete urban jungle. The spot-billed pelican that you see in Beira Lake in Central Colombo is an internationally endangered species. Beira lake is an urban oasis surrounded by a leafy walking track and busy commercial offices across the road. It is a refuge for birds like the pelicans which need water bodies to survive in a concrete urban jungle.

The lake is a perfect host for the pelicans, which swoop down from the sky to catch a fish or swim leisurely in its placid waters, as if without a care in the world.

In early mornings, one would find a number of pelicans perched on the wooden railings of the bridge between the famous Gangaramaya temple and a pretty Buddhist shrine filled with Buddha images in the middle of the lake.

At times the pelicans seem to be in mock combat with each other, and at other times they would either be gazing into the distance vacantly or using their long beaks to scratch themselves vigorously. Then suddenly, a bunch of them will decide to take off and land in unison.

According to Encyclopaedia Britannica, the pelican is any of seven or eight species of water birds in the genus Pelecanus constituting the family Pelecanidae (order Pelecaniformes), distinguished by their large elastic throat pouches.

Pelicans inhabit lakes, rivers, and seacoasts in many parts of the world. With some species reaching a length of 180 cm (70 inches), having a wingspan of 3 metres (10 feet), and weighing up to 13 kg (30 pounds), they are among the largest of living birds.

Pelicans eat fish, which they catch by using the extensible throat pouch as a dip-net. The pouch is not used to store the fish, which are swallowed immediately. One species, the brown pelican (Pelecanus occidentalis), captures fish by a spectacular plunge from the air, but other species swim in formation, driving small schools of fish into shoal water where they are scooped up by the birds.

Video and text by Tang Lu