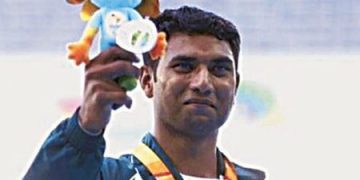 Islamabad, Sept 29 – To Haider Ali, a Pakistani long jumper who won a bronze medal at the Rio Paralympics Games this year, his physical disability is a gift from God.

“Had I not been a special person, I would not have participated in the Paralympics Games and won laurels for the country,” the 31 year old sprinter, who belongs to Gujranwala and suffers from cerebral palsy, told Dawn on Wednesday.

A few weeks prior to the Paralympics, Pakistani athletes who competed in swimming, athletics and shooting in the Olympic Games, mainly on the basis of wild card entries, failed to impress.

However, the Pakistan Sports Board (PSB) has not yet given him a cash prize for his win in Rio.

Mr Ali said: “My disability is a gift to me from God; rather than taking it as a weakness, I’m considering it my strong point, which enables me to participate in games.”

At the sidelines of a press conference organised by the National Paralympics Committee (NPC), held at the National Press Club, the athlete told Dawn that prior to entering sports, he had problems due to his disability. Now, sports has helped him overcome any sense of inferiority.

During the press conference, representatives from the committee Tariq Mustafa, Imran Shami, Amina Shami, Huma Mustafa and Mr Ali, urged the government to act as a patron and provide funding to the committee, saying Pakistani athletes had great potential to bring laurels for the country.

They said that while an Olympic medallist is entitled to a cash prize from the government, no such policy is in place for Paralympics medallists.

“A Paralympics medal is highly coveted by countries who want the world to recognise their citizens’ outstanding performance… The government of Pakistan must acknowledge the outstanding performance of Haider Ali, and he should be given cash prize in accordance with the sports board’s policy for the Olympic Games,” Mr Mustafa, NPC president, said.

According to the rules of the PSB, an Olympic gold medallist is entitled to a Rs10 million cash prize, while a silver medallist would receive Rs5 million and a bronze medallist Rs2.5 million.

When contacted, the PSB director general Dr Akhtar Nawaz Ganjera called Mr Ali an asset to the country, and said the board would provide him with the utmost financial support and facilities.

When asked about cash prizes, Dr Ganjera admitted that there were no provisions for Paralympics medallists under the existing policies.

“Earlier, the NPC was not affiliated with the PSB, however, this year the PSB – on the directive of the federal government – gave some affiliation to the NPC. Now, we will change our rules to give cash prizes to Paralympics medallists as well,” he said, adding that a Paralympics medal is worth the same respect and value as a medal won in the Olympics.