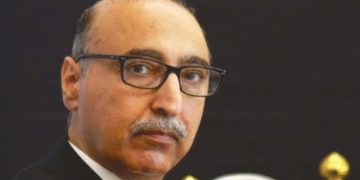 New Delhi, September 26 (NIA): Pakistan’s High Commissioner in India, Abdul Basit, has said that the war cry should cease, and diplomacy should be given a chance to bring peace between India and Pakistan, which are on the verge of a military conflict following the Pakistan-based militants’ attack on an Indian army base at Uri in Kashmir on September 18.

“Pakistan will remain positive and constructive in its ties with India and expects both countries to pull out of the current crisis with maturity from their leaders”, Basit  told The Telegraph on Sunday.

“As our prime minister has said at the UN General Assembly, Pakistan rieterates its desire to have a normal, cooperative relationship with India and resolve all problems peacefully,” Basit said.

“I would humbly suggest that it is not helpful to jump the gun. Having said that, we have seen how we cooperated after Pathankot. Things were moving in the right direction. If we could maintain that spirit I am confident we can prevent the situation from worsening,” Basit said.

Mr Basit said Pakistan is committed to not allowing its territory to be used for violence anywhere in the world, including India.

“I think we were on the right track, I was very positive, but things changed on July 8 [the day Hizbul Mujahideen militant Burhan Wani was killed by security forces in south Kashmir]. And that is when we lost the momentum.

“The challenge for diplomats on both sides now is to retrieve that momentum…Living in Delhi and meeting people from all walks of life, I do find a desire for understanding and peace here, too. I hear voices here that urge us to come together rather than become hostages to rhetoric,” Basit said.

The envoy acknowledged there had been signs of military readiness on both sides since Uri, but said: “I am not worried we are about to go to war. I strongly believe Pakistan and India do not gain anything from creating hype. War is not a solution, war creates more problems.”

“I would strongly urge that the problems we have be solved through peaceful means. We can perhaps afford not to talk to each other for some time, but addressing our many bilateral, regional and global challenges can only happen through dialogue. I am not ready to give up on that. We should not allow war hysteria to dominate our narrative.”

Basit said there are people with a vested interest in derailing India-Pakistan ties.

“If you are referring to the Pathankot attack or even Uri, I would say that both of us have agreed that the mechanisms we have put in place should have the capacity to absorb these shocks.”

“If we are back to square one after every unfortunate incident, then these mechanisms are not serving their purpose. The idea of having diplomatic engagement is to not allow those forces [who do not want] us to resolve problems and usher in a new era of cooperation. We have to transcend this process of one step forward, two steps back. But it requires two to tango.”

Asked about leaders of extremist groups being allowed to roam freely in Pakistan as they call for attacks in India, Mr Basit said the problem exists in both countries.

“I do see your point, but such voices you’ll find in India too, unfortunately. Our policy is not driven by their fiery speeches, and neither is yours, I would like to believe. I wouldn’t be too concerned about those voices. People will say all kinds of things; what’s important is what governments are thinking and doing. I believe we are committed to the bilateral desire for peace.”