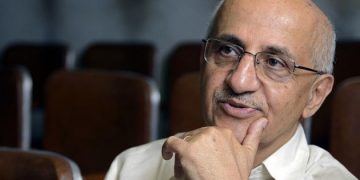 Why Pakistanis are the most gracious people in the world

Why Pakistanis are the most gracious people in the world My mother was forced to leave behind the city of her birth, Rawalpindi, when she was just 18 because of the tumultuous ruptures of Partition. She had never returned. When she was to turn 75, I thought the best gift I could give her was to take her, if it was at all possible, to the city and to the home in which she was born.

I emailed my friends in Pakistan tentatively with my plan. They were immediately very welcoming.

“Just get her a visa, leave the rest to us,” they said. I applied for visas for my parents and the rest of my family. It seemed then a small miracle that we got these easily. I booked our flight tickets, and before long we were on our way.

Our flight landed in Lahore, and our friends drove us from the airport to their home in Islamabad. I noticed that my mother was initially a little tense. Maybe it was memories of the violence of her exile; maybe it was just the idea that this was now a foreign land, and for many in India the enemy land.

I watched my mother gradually relax on the road journey to Islamabad, as she delighted in hearing my friends and the car driver speak the Punjabi of her childhood, and as she watched the altered landscape of her journey. Islamabad, of course, did not exist when she lived in the Punjab of her days.

In Islamabad, my friends invited to their homes many of their associates with their parents. They organised evenings of Punjabi poetry and music, which my parents relished. Our friends drove us to Murree, the hill-station in which my mother spent many pleasant summers as a child.

My mother had just one more request. Could she go to see the colony in Rawalpindi where she was born and spent her childhood in? My father also wanted to visit his college, the famous Gordon College in Rawalpindi.

My mother recalled that the name of the residential colony in which she lived as a child was called Gawal Mandi. My friends knew it well; it was now an upmarket upper middle-class enclave.

When we reached there, my mother tried to locate the house of her childhood. It seemed impossible. Everything was new: most of the old houses had been rebuilt and opulent new structures had come up in their place.

She located the building that had housed their gurudwara. It had now been converted into a health centre. But we had almost despaired of actually finding her childhood house. We doubted if it was even standing all these years later.

We were leaving when suddenly my mother pointed to the filigree work on the balconies of one of the old houses. My mother said: “I remember it because my father was very proud of the designs. He said there was none like it in the neighbourhood.”

Taking a chance, we knocked tentatively on the door of the house. A middle-aged man opened it, and asked us who we wanted to meet.

My mother said apologetically, “We are so sorry to trouble you, and intrude suddenly in this way. But I lived as a child in Gawal Mandi, before Partition, when we had to leave for India. I think this maybe was our home.”

The house owner’s response was spontaneous and immediate. Before long my mother conceded that this was indeed her home.

Half an hour later, we thanked the house-owners and said that we would be on our way. But they would not hear of it.

We were told: “You have come to your childhood home, then how can we let you go without you having a meal with us here?”

They overruled all our protestations, and lunch was prepared for around eight members of our party, including not just my family but also our Pakistani hosts. Only when they were sure that we had eaten our fill, and more, did they allow us to leave.

After we returned to India, news of our adventure spread quickly among family and friends. The next year, my mother-in-law — a wheel-chair user — requested that we take her to Pakistan to visit her childhood home, this time in Gujranwala.

Given the joys of my parents’ successful visit, I was more confident. Many elderly aunts and an elderly uncle joined the trip, and in the end my wife and I accompanied six older people to Pakistan.

Our experience was very similar to that of the previous year. The owner of their old ancestral haveli in Gujranwala village took my mother-in-law around the sprawling property on her wheel-chair, and after we had eaten with them asked her: “Would you not like to check out your farm-lands?”

On both visits, wherever my wife visited shops for clothes, footwear or handicrafts, if the shopkeepers recognised her to be Indian, they would invariably insist on a hefty concession on the price. “You are our guests,” they would say. “How can we make a profit from our guests?”

As news of these visits travelled further, my associates from an NGO Ashagram working in the small town of Barwani in Madhya Pradesh for the care and rights of persons living with leprosy — with which I have had a long association — demanded that I organise a visit to Pakistan for them too.

Once again, the Pakistan High Commission granted them visas. There was only one catch this time: all of them were vegetarian. They enjoyed greatly the week they spent in Pakistan, except for the food.

Every night they would set out looking for a wayside shop to buy fruit juice. Each night they found a new shop, and each night without exception, the shopkeeper refused to accept any money for the fruit juice. “We will not charge money from our guests from India,” they would say each time.

This happened for a full week.

I have travelled to many countries around the world in the 60 years of my life. I have never encountered a people as gracious as those in Pakistan.

This declaration is my latest act of sedition.

Harsh Mander was an Indian Administrative Service officer who quit to work for the underprivileged.