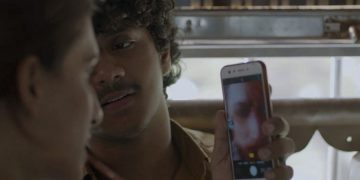 Lahore, August 9 (Geo TV): It is not often that a Pakistani film makes it to one of the ‘Big Three’ film festivals around the world. It is even rarer that a Pakistani belonging to the transgender community, with real experiences and challenges, is cast to play a queer character.

Darling hopes to shatter stereotypes and confront the South Asian society’s underlying transphobia with a real transgender actor, who, according to the film’s team, was found after “a long time” of searching for the perfect fit.

To give movie freaks a glimpse into the minds behind the 16-minute short film, Geo.tv sat down with director Saim Sadiq and producer Mahak Jiwani, who are also friends from Columbia University.

Darling, says Sadiq, “is in equal parts a coming-of-age story, a queer celebration, and a love letter to the Bollywood dream.”

But it’s not just that.

Many of us are well aware of how folks and various aspects of the South Asia region — especially Pakistan and India — are exoticised globally, with white people deeming them to be peculiar, trophies to achieve or people to be saved. That, Jiwani tells us, has been dealt with in a healthy manner.

Darling, which sets a dance theatre in Lahore as its background, revolves around a trans girl and a young boy, their dreams and aspirations, and their yearning for acceptance and visibility, coupled with a love story.

While the filmmakers wished to explore this world, they also wanted to make sure it was done “in a way that feels authentic and not exoticised,” explains Jiwani. “With Darling, I think we found a way to tell a great story while staying true to the world and its characters.”

According to Jiwani, transgender actor Alina Khan — one of the film’s two leads, who plays the trans character of the same name — “was a hard one to cast”. The team worked with Sana Jafri, a visual artist and theatre actor who facilitated contact with a local NGO for trans people and “did a fantastic job of finding our leads”.

Jiwani and Sadiq, nevertheless, were more than satisfied. “It did take a long time and there were points when we weren’t sure if we were going to be able to find the right person but it was worth it once Saim met Alina.

“Everything came together at that point,” she said.

As for Alina’s character, it is handled like any other character. “We get to see her hopes and dreams and what she must do to achieve them in Pakistani society,” Jiwani notes. “All the characters in the film are treated objectively and the film comes more from a place of love than from any kind of judgement for the world.”

‘Exploration of masculinity and femininity’

Interestingly, the short is loosely based on Sadiq’s feature film, Gulaab, which is currently in development. Both films — Gulaab, the feature, and Darling, the short — are “an exploration of masculinity and femininity set in […] the dance subculture, an open secret in the otherwise repressive Pakistani society”, Sadiq explains.

The two friends tell us that their work started back when they were in Columbia. “We developed this film over a couple of years before we received the Katharina Otto-Bernstein Production Award”, Jiwani notes.

“With Darling, we set out to tell a story that would be true to the people who are often at the margins of society. Just by having these stories out in the world, and for people to see themselves in the media and in culture as human beings, I think we stretch the boundaries of what’s acceptable and what’s not,” she adds.

The same sentiment — of encouraging inclusion and acceptance in Pakistan — is echoed by Alina, the trans actor who plays the lead. Speaking to Geo.tv, she urges her community not to listen to hateful comments by people.

“If you have any skill or talent, show it so that people around the world can see that just because we’re trans, we’re not confined to beg or be used for sex,” she stresses, pushing her trans friends to bring their talent in front of people so their dignity and importance are brought to light.

“Flaunt your talent,” Alina cheers on, noting at the same time, albeit despondently, that most people “think of us as nothing … they think we’re insignificant”.

That is “just because they don’t understand, they don’t think of us as humans, they don’t believe we have rights”, she says.

Last year, in May, Pakistan took up transgender rights in its legislation for the first time when the National Assembly passed a bill allowing official recognition of a person’s self-perceived gender identity, permitting the creation of official documents, and banning discrimination in public spaces.

But transphobia is still common in Pakistan, with various queerphobic slurs in Urdu used not only to demonise trans folks but to attack effeminate boys and men who do not adhere to ‘bro code’ and strict rules of masculinity.

On top of that, stories of violence against transgender people emerge every couple of weeks on mainstream media; that includes threats by using identity assigned at birth, assault and beatings, sexual abuse, and murder, among other things. To counter such instances, eliminate aggression, and deal with the alienation trans people face, a change in the mindset is required so as to promote tolerance and acceptability.

“Ultimately, the more normalised these stories are, the more people can come out of the shadows to speak,” Jiwani mentions. It would be challenging, of course, but “there is definitely more representation now than ever before”, she believes.

“The more stories we have which represent everyone truthfully, without judgment, including people at the margins, women, trans-people, religious minorities etc., the more we can move towards a tolerant society where an entire community won’t come under fire because of alleged actions of individuals,” Jiwani thinks.

Aradhiya Khan agrees, saying “this kind of work portrays a positive image and should be encouraged”.

The transgender activist, who also dreams of someday working in media, considers such achievements as “important, even for the community” since they help in “the portrayal of a very positive image”. That’s why she thinks there should be more facilitation for newcomers.

At the same time, it is important to understand the representation of a trans model or trans actor in such a way that “they are not just one individual; they’re more than thousands”. Encouraging inclusion of trans folks in entertainment, she urges for more “transgender individuals doing trans roles and modelling, rather than some male actor ‘playing’ a transgender person.”

The trans activist further adds: “Many times we have seen comedy shows portraying a very negative and discriminatory image of trans individuals and I think such things should not be encouraged at all.”

From being cast as comic relief and made the butt of jokes to having to listen to insults and sexual innuendos, trans characters on Pakistani screens have historically been treated very disrespectfully. The mocking and hatred are only compounded by similar portrayals in late-night shows.

It is now up to Darling to bring a fresh perspective, boost the community’s image, and stretch the boundaries of acceptability.

Needless to say, we’re very excited to sit in that dance theatre in Lahore to see a new show being prepared, a dreamy trans girl vying for the spotlight, and a naive young boy falling in love for the first time!