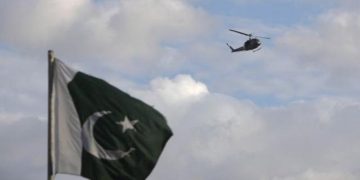 Aug 6 (NIA) – Pakistan has sought help from the US and Afghan government to ensure the safe return of the crew of a Pakistani helicopter that crash-landed in a lawless region of Afghanistan and is being held by the Taliban.
An MI-17 helicopter owned by Punjab provincial government was on its way to Russia for routine maintenance when it was forced to make crash-landing in Logar on Thursday, a province with large areas under Taliban control.
A local media report quoting a Pakistan army spokesman said that Army Chief General Raheel Sharif called NATO and US forces top commander in Afghanistan, General John Nicholson and Afghan President Ashraf Ghani for help to get back the crew.
Both Nicholson and Ghani have assured their support in getting the crew back.
Pakistan Prime Minister Nawaz Sharif said federal government is in constant touch with the relevant authorities in Afghanistan and the state’s resources are fully utilised to rescue the personnel who were onboard in the helicopter.
“Formal and informal channels are being used to ensure safe recovery of the entire crew,” he said in a statement.
“We are profoundly concerned about the safety of the whole team that was travelling on the helicopter. We have formally requested the Government of Afghanistan to help in their safe recovery, at the earliest possible,” he said further.
Afghan officials said the helicopter went down late on Thursday in Logar province, close to the Afghan-Pakistan border, an increasingly lawless area since a two-year Pakistani military operation pushed many Taliban and allied fighters further into Afghanistan.
“The chopper was not shot but made the landing because of technical failure,” Sameem Saleh, spokesman for Logar’s governor told the media.
A Pakistan government spokesman said that seven passengers were on board, six of them Pakistanis and one a Russian technician. The pilot was Pakistani.
The Russian-made MI-17 transport helicopter had permission to fly over Afghan airspace on its way to Uzbekistan further north.
A senior Pakistani military official also said the helicopter was en route from Peshawar in northwest Pakistan to Uzbekistan for maintenance when it experienced technical failure and made an emergency landing.