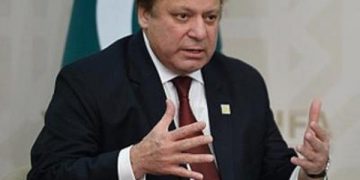 Pakistan says strong US ties will maintain security in region, wants to work closer with Trump

Pakistan says strong US ties will maintain security in region, wants to work closer with Trump Islamabad, Nov 10 (NIA) – Pakistan President, Nawaz Sharif, on Thursday said that a strong partnership between the US and Pakistan remained critical in promoting and sustaining peace, security and stability in the wider region.

In a message sent to the new US President-elect, Donald Trump, Sharif said his government wished to work closely with the new leadership of the United States.

“I wish to re-affirm my government’s commitment to further strengthening and deepening of our relations, in a manner truly reflective of the aspirations of our two nations,” Sharif said.

“I am looking forward to closely working with you, to bring our two countries closer and making our partnership an important vehicle for the realisation of peace, security and prosperity in the region and beyond,” he added.

Sharif also said that Pakistan and the United States have enjoyed a strategic partnership, rooted in the shared ideals of freedom, democracy, mutual respect, and commonality of interests, and he now wished to further strenghten those ties.

His victory sent shockwaves throughout the world, especially amongst the Arab nations due to his anti Muslim policies.