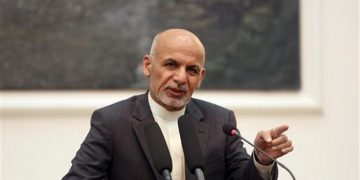 Islamabad, September 11 (NIA):  In a further sign of worsening relations between Pakistan and India, Pakistan said on Saturday, that Afghanistan can use the Wagah border to export to India but it cannot use it to import from India because allowing imports through Wagah will benefit India.

This was told the BBC Urdu service by the Pakistan Foreign Office spokesman Nafees Zakaria.

Pakistan has not stopped Afghan traders from moving products to India through the Wagah border, Zakaria said after Afghan President Ashraf Ghani warned Islamabad to open the land border or lose transit route to Central Asia.

“Pakistan is fulfilling its commitment to the Afghan people by providing them a trade transit facility,”  Zakaria said.
He clarified that under Islamabad’s bilateral agreement with Kabul, Afghanistan could export goods through Pakistan but Indian goods could not be imported into Afghanistan through Pakistan.

Zakaria’s remarks came after President Ashraf Ghani threatened to block Pakistan’s land access to Central Asia if it did not allow Afghan traders to take their goods to India through Wagah land border check post.

“If Pakistan does not allow Afghan traders to use the Wagah border for imports and exports of their goods, Afghanistan will also not allow Pakistan to use Afghan transit routes to reach Central Asia and other countries for exports,” Ghani said in a meeting with Britain’s special envoy for Afghanistan and Pakistan Owen Jenkins in Kabul on Friday.

A spokesperson for Pakistan’s trade ministry contended that the Afghan leader was practically seeking concession for India as Afghan trucks were already allowed to deliver their goods to India. However, as per the existing arrangement, they are not allowed to carry back Indian goods.

“Giving concession to India is unlikely at this stage,” the official told Dawn, alluding to worsening ties with Delhi. “Connectivity through Wagah is still far away.”

Indian External Affairs Minister Sushma Swaraj had at the last Heart of Asia ministerial conference in Islamabad expressed her country’s desire to join the Afghanistan-Pakistan Trade and Transit Agreement.

“It’s not new. He (Ghani) gave a similar statement last year as well during his visit to India and is again scheduled to travel to Delhi next week (September 14),” he recalled.