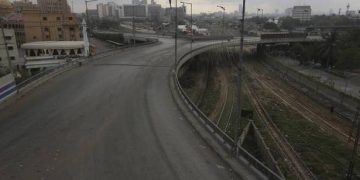 Roads and rail lines sit empty during public restrictions due to the coronavirus in Karachi, Pakistan, Pakistan, March 20, 2020. The vast majority of people recover from the virus | Photo Credit: AP

March 23 (Geo News) – The death toll from novel coronavirus in Pakistan rose to six on Sunday, after the country reported its first death from Balochistan.

Balochistan government’s spokesperson, Liaquat Shahwani confirmed the province’s first death from the virus on Sunday in a tweet.

The deceased was a 65-year-old man, under treatment at the Fatima Jinnah Chest Hospital, according to Shahwani.

Earlier, a doctor from Gilgit Baltistan was reported as the country’s fifth death.

The doctor who screened suspected pilgrims returning to Pakistan from Iran tested positive on Friday, Dr Shah Zaman, a senior member of the Health Department and focal person of GB government for coronavirus, told The News.

According to Zaman who met the physician on Thursday evening, the doctor looked fine and did not complain of anything. However, when his wife tried to wake him the next day, he did not respond.

The doctor was shifted to the Provincial Headquarter Hospital (PHQ) in Gilgit city where he was put on a ventilator and a swab test done which came back as positive confirming him as a positive case.

On Sunday morning, Adviser to Khyber Pakhtunkhwa Chief Minister on Information Ajmal Wazir announced the country’s fourth death from the virus, while speaking to the media.

Wazir said that the test results of a woman who had arrived from Taftan and shifted to Dera Ismail Khan had come as positive today, making it the province’s third coronavirus related death.

On Friday, Pakistan had recorded its third death from the virus. Sindh Health Minister Dr Azra Fazal Pechuho had confirmed the death of a 77-year-old COVID-19 patient in the province.

Last week, two patients from KP who tested positive for the coronavirus had died, officials said.

However, both had a travel history in countries that have been hit by the outbreak. The patient from Sindh who passed away on Friday was the first death from the local transmission of the virus.

The number of confirmed coronavirus cases in Pakistan rose to 803 on Monday after new cases were reported throughout the country.

Sindh remains the worst affected with a total of 352 cases. In Karachi alone, the numbers of cases are 130 with the majority said to be cases of “local transmission”.

In Punjab, according to Chief Minister Punjab Usman Buzdar, there are 225 coronavirus cases so far.

According to the Khyber Pakhtunkhwa health department, the number of cases in the province stands at 31 after four new patients were reported, while the number of reported cases in Gilgit-Baltistan is 71.

In Balochistan, the number of cases are 108, while one case has been reported from Azad Jammu and Kashmir.

While in Islamabad, 15 patients have been confirmed to have contracted the virus.

Globally, 192 countries have been affected, more than 14,000 people have died and more than 337,000 infected by the disease as it spreads rapidly to new territories.

The epicentre of the outbreak has now shifted to Europe, especially Italy, which is recording a rapid rise in new cases and deaths every day.