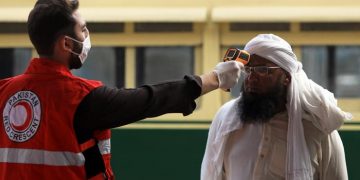 According to the Sindh Health Department, the new cases were reported in pilgrims from Taftan being quarantined in Sukkur.

The number of confirmed cases in Pakistan now stands at 519.

A day earlier, Pakistan had recorded its third death from the coronavirus; the first in Sindh.

Sindh Health Minister Dr Azra Fazal Pechuho had confirmed the death of a 77-year-old COVID-19 patient in the province.

Earlier this week, two patients from KP who tested positive for the coronavirus had died, officials said. However, both had a travel history in countries that have been hit by the outbreak. The patient from Sindh who passed away on Friday was the first death from local transmission of the virus.

Sindh remains the most affected province in the country, with 267, confirmed cases of the virus. Punjab has 96, KP has 23, Balochistan 92, Islamabad 10, and GB has 30 confirmed cases.

Globally, 185 countries have been affected, more than 10,000 people have died and more than 253,000 infected by the disease as it spreads rapidly to new territories. The epicentre of the outbreak has now shifted to Europe, especially Italy, which is recording a rapid rise in new cases and deaths every day.