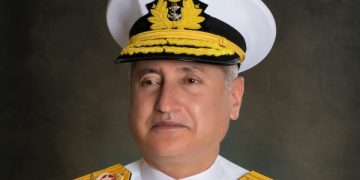 The visit, along with those by the Indian naval chief and the Indian National Security Adviser, shows Lanka's strategic importance. Colombo, January 25 (newsin.asia): Pakistan’s Chief of Naval Staff, Admiral Zafar Mahmood Abbasi, is on a five-day visit Sri Lanka at the invitation of the Sri Lankan Navy commander, Vice Admiral Piyal De Silva. He will be in the island till January 29, a Pakistan High Commission release said.

Earlier in December 2019, the Indian navy chief Adm.Karambir Singh had come on a similar visit, indicating the importance of Sri Lanka in the South Asian and Indian Ocean strategic environment. Earlier in January, the Indian National Security Advisor Ajit Doval was in Colombo to talk to President Gotabaya Rajapaksa about Maritime Domain Awareness, Interoperability of the Sri Lankan and Sri Lankan Coast Guards, technologically improved intelligence gathering, and the setting up of a Maritime Coordinating Center in Sri Lanka.

During his stay in Sri Lanka, the Pakistani navy chief Adm. Abbasi will meet the Commanders of the Sri Lanka Navy, Army, Air force and the Defence Secretary. He will also call on the Prime Minister of Sri Lanka.

In recognition of his meritorious services, the Admiral has been awarded Nishan-i-Imtiaz (Military) by Government of Pakistan.