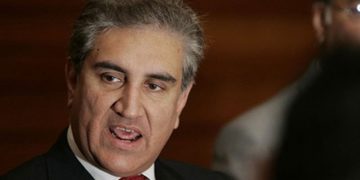 Speaking to the media before leaving, the foreign minister said India is intent on disrupting the regional peace with its unconstitutional measures. China is not only a friend to Pakistan but also an important country of the region.”

Earlier, while speaking to a private television channel, Qureshi said the Indian government can stage a Pulwama like terrorist act or drama to avoid the world’s attention from the grave situation in the occupied valley.

“The entire world has condemned the unconstitutional move of the Bharatiya Janata Party government to revoke the constitutional status of held Kashmir,” the foreign minister said, adding Pakistan would raise the issue at international fora and provide political, legal and diplomatic support to the people of occupied Kashmir in their just struggle for right to self-determination.

In response to a question about any misadventure by India in Azad Jammu and Kashmir, the foreign minister said the diplomatic community in Islamabad had been informed of Pakistan’s concern in that regard.

India could stage a Pulwama type terrorist act to avoid the world’s attention, he stressed.

The Indian government on Monday rushed through a presidential decree to abolish Article 370 of the Constitution which grants special status to Indian occupied Kashmir, as tensions mounted in the disputed valley with unprecedented numbers of Indian troops deployed in the region.