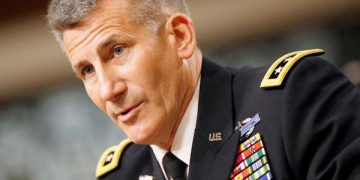 Kabul, September 27 (NIA):  The commander of the US-led international forces in Afghanistan, General John Nicholson has agreed with the US Secretary of Defense Ashton Carter who had said earlier that Pakistan did not put pressure on the terrorist Haqqani Network to abandon terrorist activities against the Afghan government and security forces.

In a briefing to the US Department of Defense, Gen. Nicholson, said: “As far the strength of the Haqqani terrorists as you know, the secretary of defense in August in his response to the Congress as a result of the National Defense Act and Authorization Act of 2015, he was required to respond to Congress on whether there was adequate pressure being placed on the Haqqani terrorists by the Pakistan government.”

“I was unable to certify that there was sufficient pressure being placed on them to justify additional coalition support funds to Pakistan. Kind of a lengthy explanation, but it was his way of saying that there’s not adequate pressure being put on the Haqqani network,” the US top military officer cited.

“And I concur with the Secretary’s assessment on that. Then we see that the Haqqani terrorists operationally have been able to conduct operations inside Afghanistan — they constitute the primary threat to Americans, to coalition members, and to Afghans especially in and around Kabul.”

The remarks by Gen. Nicholson come as the United States stopped $300 million in military reimbursements to Pakistan due to the lack of actions by the country towards the terrorist network.

The Afghan officials have long been criticizing Pakistan for allowing terrorist groups to use its soil for planning and coordinating attacks in Afghanistan.