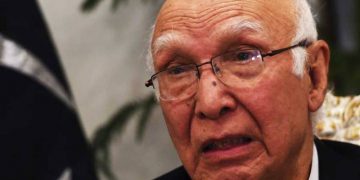 The request was put in writing by none other than Sartaj Aziz ,Advisor to Prime Minister Nawaz Sharif on foreign affairs. In his letter to the  international president of MSF, Aziz highlighted the existence of a medical emergency in India-held Kashmir, the Foreign Office said in a statement.

Aziz said that the emergency situation in Kashmir had developed as a “result of the atrocious Indian brutalities against unarmed and defenseless civilians”.

Aziz particularly emphasized the urgent need of eye surgeons, as hundreds of people were suffering from severe eye injuries caused by the use of pellet guns on peaceful protesters.

India-held Kashmir’s main hospitals are struggling to treat hundreds of patients wounded in clashes with Indian forces, and many injured people have lost their eyesight due to shotgun injuries, Aziz said.

Dr. Kaisar Ahmad, Principal at Government Medical College Srinagar, said that hundreds of people had been treated for pellet injuries since July 9 when violence broke out in Kashmir during protests sparked by the death of a separatist militant Burhan Wani.

Indian Home Minister Rajnath Singh had asked security forces to refrain from using pellet guns against protesters but the Security Forces maintain that pellet guns are the least offensive among methods of controlling violent demonstrators.

Number of Deaths Goes Up To 56

Three more civilians including a teenager fell to bullets and pellets fired by government forces in Kashmir on Friday and more than 400 protesters sustained injuries due to bullets, pellets and teargas shelling in massive day-long clashes across the Valley, the Srinagar-based Greater Kashmir daily reported.

The ‘Dargah Hazratbal Chalo’ (March to the Hazratbal Shrine) campaign  was foiled with full force and a massive clampdown. But still two civilians were killed in central Kashmir’s Budgam district while another was shot dead in North Kashmir’s Sopore area.

The condition of at least six injured is stated to be “critical” to “very critical.” Witnesses said over 100 protestors sustained pellet injuries in Sopore alone of which 25 were referred to Srinagar hospitals for specialized treatment. With the fresh three killings, the death toll in ongoing Valley unrest has touched 56 while the number of injured has mounted to over 4000 in a span of just 28 days.

Witnesses said people wanted to stage a peaceful protest in Chadoora Budgam town but the forces had sealed entry points, triggering anger among people who resorted to violence.

They said at various places, the angry protestors managed to march towards Chadoora where they tried to attack the local police station with bricks and stones. Police resorted to pellet firing in which many were injured. As protests and clashes were on at various places in Chadoora, protestors from Loolipora and Watkulu tried to march towards Chadoora in large numbers. Witnesses said intense clashes broke out near J&K Bank Nagam where forces opened fire on protestors in which Muhammad Maqbool Wagay (35), son of Abdul Kareem of Loolipora, sustained bullet injury in his chest. Witnesses said he was referred to the Primary Health Centre Nagam where doctors declared him “brought dead”.

Deputy Commissioner Budgam Mir Altaf Ahmad confirmed the death of Wagay, stating he was injured in clashes at Nagam.  As the death of Wagay spread in the area, massive protests took place with women, children and youth hitting the streets amid pro-freedom sloganeering.

In yet another incident, at the Khansahib area of Budgam, forces opened fire on protestors in which two youth sustained bullet injuries and were referred to Srinagar in a critical condition. Witnesses said one of the injured identified as Sameer Ahmed Wani (21), son of Noor Muhammad of Mulanaroo village of Takia-Farooq Khansahib, succumbed to his injuries at SMHS hospital in Srinagar. Official sources said Sameer had sustained bullet injuries in his abdomen.

As per hospital sources, at least 87 people were injured in the forces’ action in Budgam district, and among them 40 youth were injured in Chadoora alone, 32 at Nagam, and 15 from Magam, Beerwah, Aridna, Aripanthan, and Makhama villages. Medicos said most of the injured had pellet injuries.

“Two sisters of slain youth also got injured in the police action. Police fired at the tents of volunteers in SMHS premises, triggering chaos. Police wanted to take the body of Sameer but volunteers and locals resisted the move,” a volunteer said.

Sameer’s body was taken away by locals and kept in a local mosque compound for nearly 15 minutes, after which his family members took it and proceeded towards Khansahib. Forces also damaged a hospital ambulance while four volunteers sustained injuries in the police action.

As Budgam was in state of mourning, another teenager was shot dead with a volley of pellets at Batpora area of Sopore. He was identified as Danish Rasool Mir  son of  Ghulam Rasool, a resident of Kreeri Baramulla who was brought up at his maternal house at Batpora Sopore.

Witnesses said youth from various areas had gathered to participate in a peaceful demonstration against civilian killings at the Chanakhan area of Sopore. As the protestors started to march towards main town Sopore, police and para military men fired indiscriminately injuring at least 105 persons, they said. Among the injured, Danish sustained a volley of pellets, witnesses said.

“We shifted him to Sub District Hospital Sopore, where he succumbed. He was a class 12th student,” locals said.

Hazratbal Shrine Made Out of Bounds

Witnesses said all entry and exit points of Kashmir’s revered Dargah Hazratbal had been sealed with concertina wire amid heavy deployment of forces around the shrine.  A senior Waqf Board Board employee said it was for the first time in recent times that Friday congregational prayers were not allowed at the Hazratbal shrine.

“I think in the early ‘90s when militancy was at its peak, Friday prayers not allowed at the Hazratbal shrine. Today it has happened again,” he said.

Friday congregational prayers were not allowed in the historic Jamia Masjid in Srinagar for the fourth consecutive Friday. The Auqaf Jamia Masjid has strongly condemned the continuous curbs on prayers at the mosque as a blatant denial of the right to practice one’s religion, Greater Kashmir reported.