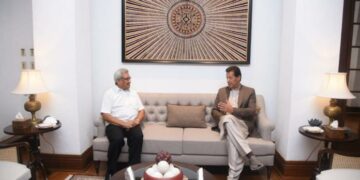 Imran Khan noted that Pakistan and Sri Lanka had always stood by each other and re-affirmed Pakistan’s steadfast support to Sri Lanka in future. The close cooperation between the two sides in multilateral forums  was re-affirmed

This commitment is significant in the context of the on-going session of the UN Human Rights Council (UNHRC) in Geneva in which an anti-Sri Lankan resolution is expected. Pakistan is a member of the 47-nation council.

During the talks held in a warm and cordial atmosphere, the Pakistani Prime Minister underlined the “exceptional quality of Pakistan-Sri Lanka relations marked by trust, understanding and mutual support.”

The importance of sharing experiences in poverty alleviation was also stressed.

Two leaders exchanged views on sharing technical knowhow in order to promote agriculture in both the countries, a release from the Lankan President’s office said.

While noting the close traditional and cultural ties between the two countries, Prime Minister Imran Khan highlighted that Pakistan had the potential of being a choice destination for religious tourism for Sri Lankan people. He particularly highlighted the rich Buddhist heritage of Pakistan.

In the regional context, Prime Minister Imran Khan shared his vision of peace, development, and connectivity.

Prime Minister Imran Khan also emphasized the importance of regional cooperation through the platform of SAARC and the opportunities for regional prosperity through CPEC, the flagship project of the Belt and Road Initiative (BRI).

The Pakistan Prime Minister extended a cordial invitation to President Gotabaya Rajapaksa to visit Pakistan at the earliest convenience.