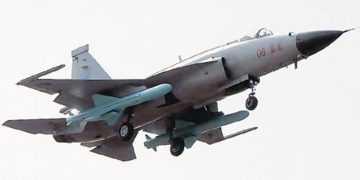 JF-17 Thunder made in Pakistan with Chinese kits

Announcing ACM Aman’s visit,  a Pakistan High Commission press release said that the visit will provide both sides an opportunity to review ongoing cooperation and collaboration, and to discuss ways and means to “enhance continued cooperation between the two countries.”

“Enhancement” of cooperation could well mean Sri Lanka’s purchasing F-17s from Pakistan. A serious attempt was made in late 2015 and early 2016 to sell the Sino-Pak jointly produced aircraft to Sri Lanka in a US$ 400 million deal financed by Pakistan. But the attempt failed because India stood in the way as it considered Sri Lanka to be within its areas of influence in strategic terms, the paper observes.

Given the deteriorating relations between India and Pakistan as a result of the month-long violent agitation in Kashmir which Pakistan is openly exploiting to push its agenda, it is very likely that India will be concerned if there are renewed efforts by the Sri Lankans and Pakistanis to strike a deal over the F-17s.

Given the way the Sirisena-Wickremesinghe government is cozying up to China as part of its policy of being friends with all, a deal with Pakistan, a trust old friend, cannot be ruled out.

However, Sri Lanka’s Defense Secretary Karunasena Hettiarachchi said in an interview recently that no decision has been taken on which aircraft to buy and from which country. At any rate, any purchase will be done after floating a tender and calling for bids as per standard government procedure, he added.

In 2015-2016, Pakistan and Sri Lanka were indeed seriously discussing a deal, prompting India to tell Sri Lanka through a “non-paper”, that Sri Lanka did not need fighters. But Indian defense experts privately agreed that Sri Lanka’s quest for new fighters was legitimate as its fleet was old and outdated. As a defense expert put it: “A nation has to modernize its fleet in order to meet any eventuality without abject dependence on foreign powers.”

But India  can offer Tejas now, said an Indian defense expert. It has been test flown successfully and some aircraft are to join the Indian Air Force soon.