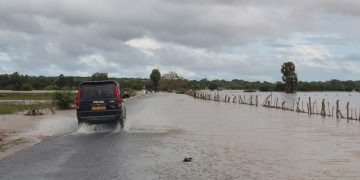 Over 60,000 affected by flash floods in northern Sri Lanka

Over 60,000 affected by flash floods in northern Sri Lanka Colombo, Dec 24 (newsin.asia) – Over 60,000 people have been affected by flash floods and heavy winds, in Sri Lanka’s northern province, after days of heavy rains, the Disaster Management Center said Monday.

Out of those affected, over 11,000 people have been evacuated to safe locations as their homes were inundated due to continuous rains.

As of Monday morning, Disaster Management Center Spokesperson, Pradeep Kodippili said flood waters were receding and the situation was normalizing but people were told to remain cautious as more rains were expected in the coming days.

The worst affected districts were Mullaitivu, Killinochchi, Mannar, Vavuniya and Jaffna. No deaths or injuries have been reported so far.

The tri forces and police have been involved in rescue operations while President Maithripala Sirisena has directed officials to provide immediate relief to the affected people.

The Disaster Management Ministry is also evaluating the extent of damage caused by the floods and has announced a compensation for fully and partially damaged houses.

Meanwhile the Meteorology Department, in its latest weather alert warned of more rains in the north, east and north central provinces while heavy falls of about 75mm could be expected at some places in Central, Sabaragamuwa and Western provinces.

“There may be temporary localized strong winds during thundershowers. General public is kindly requested to take adequate precautions to minimize damages caused by lightning activity,” the Meteorology Department said.