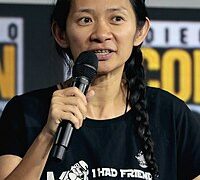 by Editor
in Around The World, Entertainment, Movie, World
Reading Time: 2 mins read
6 1 April 26 (CNet) – Before Sunday, you might have known Chloé Zhao as the director of Marvel’s upcoming Eternals, but now she’s the Oscar-winning director of Marvel’s upcoming Eternals. Beijing-born Zhao just won best director at the 2021 Oscars, beating Emerald Fennell and David Fincher, among others. The victory makes her the first woman of color to take home the award, and only the second woman in the Academy’s 93-year history, after Kathryn Bigelow for 2008’s The Hurt Locker.

The film that landed her the achievement: Nomadland, a contemplative drama set in America’s Midwest that also won best picture. It follows Fern — played byFrances McDormand — a woman who loses her job in the Great Recession and goes wandering. Taking odd jobs, meeting nomads and living in a transient community.

What was Chloé Zhao up to before Nomadland? Aside from spending the pandemic editing Eternals, starring Angelina Jolie, Richard Madden, Kumail Nanjiani and even more big names, the 39-year-old cut her teeth and cemented her naturalistic and empathetic style in the indie realm. 2015’s Songs My Brothers Taught Me and 2017’s The Rider are both set in South Dakota and star untrained actors. They tell fact-based stories, focused on the human condition.

It’s a slight leap from quiet character dramas to big blockbusters, but that’s no roadblock. Zhao’s next project? Dracula. A new take on the Count for Universal Pictures. A very different take, if Kevin Feige’s comments on Eternals are anything to go by.

“Not only does Chloe make remarkable, small, personal movies in a remarkable, small, personal way, but she thinks in grand, cosmic, gigantic terms, which fit perfectly with what we wanted to do,” Feige said of Zhao’s pitch for the Marvel Cinematic Universe entry. “Eternals is a very big, sweeping, multimillennial-spanning story. And she just got it.”

Zhao’s Dracula promises to be a sci-fi Western, with her singular lens intact. “I’ve always been fascinated by vampires and the concept of the Other they embody,” Zhao said in a statement, following the news she would be directing the monster film. “I’m very excited to work with Donna [Langley], Peter [Cramer], and the team at Universal to reimagine such a beloved character.”

If you haven’t seen it yet, Nomadland is out on Hulu in the US and through Star on Disney Plus elsewhere in the world. (It’s still in cinemas in some locations and should be seen on the largest screen possible — if you can.)