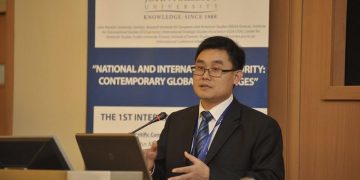 India’s First Post on Monday published a commentary titled “Maldives crisis: Malé is latest theatre for India-China proxy war.” The Press Trust of India reported that as the emergency in Maldives continues, India is expected to follow a standard operating procedure of keeping troops in a state of readiness. India in 1988 dispatched armed forces to Maldives to quell a riot.

India’s concern is not the political crisis itself, but the series of diplomatic moves by Maldives over the past few months. Maldives has joined the China-proposed Belt and Road Initiative (BRI), approved a free trade agreement with China and cooperated with Beijing on island development. These were seen as “pro-China and anti-India” gestures by some Indian commentators.

India-Maldives tensions peaked in December after a Maldives newspaper described Indian Prime Minister Narendra Modi as a Hindu extremist and branded India an enemy. Since Modi came to office, the only neighboring country in South Asia that he has not visited is Maldives. India has also been in touch with Maldives’ opposition.

Although the Yameen government is friendly to China, it’s not anti-India. Opposing India is not in Maldives’ national interest. Malé is very concerned about New Delhi’s attitude. The Maldives Ambassador to India, Ahmed Mohamed, reaffirmed his country’s commitment to the “India First Policy.” It’s fair to say that India’s influence pervades Maldives’ internal and external affairs.

Differences between the two countries involve ties with China. New Delhi hopes Maldives prioritizes Indian concerns while Maldives hopes to develop ties with both New Delhi and Beijing, especially in the economic sphere. After the political crisis broke out in Maldives, the First Post, without concerns for international law or scruples, said India must act to secure its backyard.

If India really wants to improve relations with neighboring countries to weaken China’s influence in South Asia, the best way is to compete economically with China under the existing system of international law rather than trying to control its neighbors.

India must abide by international law and respect the sovereign rights of its neighboring countries. The system of sovereign countries has been established after World War II and “state of protection” has become an outdated concept. No country is willing to be controlled by others. Just as India wants to maintain a balance among China, the US, Russia and Japan to protect its interests, its neighboring countries also want to develop relations with China and India at the same time.

South Asia is economically backward. Economic development is the basic prerequisite to solve a series of political and social conundrums. Maldives has no political and security demands on China. It only has economic ones. Given geopolitical factors, it is impossible to replace India’s unique status in South Asia with China. Tourism is the main economic pillar and source of foreign exchange for Maldives while China is its largest source of tourists. Official figures released by Maldives show that the country received more than 1.2 million tourists in 2017, with Chinese arrivals representing more than a quarter of visitors.

As a small country in South Asia and the Indian Ocean, Maldives has neither big strategic expectations, nor can it become a strategic pivot of China in the region. Maldives is striving for better livelihood for its people amid wrangling among big powers. The issue is simple, but India thinks it is very complicated.

(The featured image at the top is that of the author Pof.Zhang Jiadong, Director of the Center of South Asian Studies, Fudan University ,China).