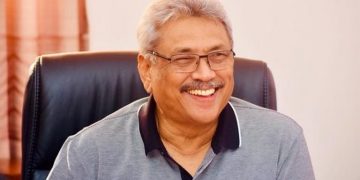 One term is enough if allowed to work without hindrance: Gotabaya Rajapaksa

One term is enough if allowed to work without hindrance: Gotabaya Rajapaksa

The 19 th.,Amedment has put the country in a mess, says the Sri Lankan President Colombo, March 9: Last week, President Gotabaya Rajapaksa met with the print and electronic media editors for an open forum discussion. The journalists were relentless, but the President remained cordial and never bluffed his way out. Following are few excerpts of the discussion.

The purpose of the meeting President had with the ICT was the first question.

“Knowledge is the word of the century,” stated President.

Further explaining, he noted that technology is now the key to develop the economy. Therefore, though his Administration is focused on developing industries such as agriculture and tourism, the priority is given to developing IT based technology. It is on this basis he spoke to the ICT heads, he said.

“Currently, the IT based industry in Sri Lanka is worth USD 1 billion,” he said. “We can easily bring this to be a USD 3 billion industry, creating job opportunities for 300,000 people.”

However, he noted that skill is a very important factor in this industry. Thus, there needs to be a coherent plan to develop the skill level of the youth. The ICT heads were asked to suggest ways the government can help them to develop the industry, President revealed.

The President was asked as to the reasons for wanting a two third majority parliament.

“I have been elected as the Executive President. The people have elected me with great expectations. However, I am prevented from using my executive powers,” noted President.

This has happened due to haphazard, short-sighted amendments to the Constitution. The 19th Amendment is a case in point, he observed.

“This Amendment has put the whole country into a mess. I need to first remove the obstacles that are preventing me from fulfilling the expectations of the people. For this, I need a two third majority in the Government.”

Would the 19th Amendment be replaced by something like the 18th Amendment, questioned a journalist.

“Keeping the term limit is not an issue,” reply came with a wry smile. “Actually, I don’t even need a second term to execute my plans. But I should be allowed to work in these five years without a hindrance.”

However, with the 19th Amendment would the Independent Commissions also be removed, the journalist persisted.

“Are these Independent Commissions independent?” asked the President in turn. Making a clear reference to Professor Hooles’ conduct at the Election Commissions, he said, “We saw how one member in these Commissions was trying to promote his personal views as the Commission’s agenda. One can hold his own views. But as an office bearer, he cannot allow his personal objectives to get in the way of the Commission’s mandate. The country must be the beneficiary.”

“Was it to ensure that the Police force will be independent?” President asked again and got a few assents.

“Does that mean that the IGP, who had served the Police Force for 35 years, is not a credible person? If we can’t trust someone after 35 years of service, how can we trust a Commission just because the members were appointed by the Constitutional Council? If we want the Police force to be independent, then we must identify the root of the problem and make sure that the IGP can work independently.”

Another journalist sought a clarification on the Election Commissioner’s directive to stop all training of graduates until the end of the elections.

Clearly perplexed by the Election Commissioner’s directive, the President said, “I really don’t understand why the Election Commission took such a decision when even nominations have not been called yet. It might have been logical had he asked us to stop recruiting the graduates. But, it does not make any sense to stop the training of those already recruited. This affects the entire State administration. Once we hire new people, they have to be trained to do their job. How can they work without any training or wait without working for months until elections are concluded?”

President explained that the graduates were hired on the basis of their applications, without consideration to any other factor. “We did not consider even from which village they came,” he said. It was noted that a letter expressing these concerns will be sent shortly to the Election Commissioner with a request to reverse the decision.

The Government’s stance at the UNHRC sessions dominated the discussion. The Government announced that Sri Lanka will no longer co-sponsor the inimical UNHRC Resolution 30/1 but also reiterated that Sri Lanka’s commitments to Human Rights remain unchanged. One journalist observed that the people in the North would be confident of a local mechanism. Therefore, he asked the strategy of the Government to win their trust.

President explained that the root of political issues is economic woes. Even the 1971 insurgency that erupted from the South was due to the prevailing economic issues. Unfortunately, politicians for their gain give these root causes their own interpretation.

He rejected that these issues are based on ethnicity. “Are there not very affluent Tamils in this country?” he asked. “At the same time, don’t we have Sinhalese that survive on murunga leaves?”

The only effective solution is to develop the economy and raise the living standards of our people. Irrespective of ethnicity, religion or any other parameter, all Sri Lankan citizens should have facilities for education, health care and other services to live with dignity.

The President was asked his response for families of the disappeared wanting reparations.

When you say, ‘disappeared’ what is the impression that forms in your mind? How have they disappeared? Have they been arbitrarily abducted? No. These disappearances had occurred during the war. We have studied and analyzed this issue very carefully. Even in the Sri Lankan Army, there are people who had disappeared.

“I can tell you by experience that in a war, situations arise where we can’t recover the bodies. When I went to liberate the Jaffna Fort during Eelam War II, I saw bodies of our men strewed across – just 100 yards from us. Bodies of the terrorists were also lying on the same ground. But because of the intensity of battles, we can’t reach these bodies. In front of us, crows would fly and peck at these bodies and in a few days the bodies start to decay. The bodies could not be sent to the families and for them, he is still there – somewhere. Those days, when I was the Defense Secretary they would come and tell me that according to soothsayers their son is still alive. But we know he is not.

“Even during the Muhamalai operation in 2006, we lost over 100 men. It was months after the ICRC could hand over the bodies to us. By that time the bodies had decayed so much, none of them could be recognized. So, we did not send a single body to their families. These families however have now come to terms with the fact.

“Many do not know, but as soon as the war ended UNICEF did a study and asked the people in the area about the missing. Out of 2,600, about 60 said that they do not know what has happened to their loved ones, eight accused the military for their disappearances but the rest said that their loved ones were either willingly or forcibly conscripted by the LTTE.”

Answering the persistent question what kind of solution the Government has for these families, “a death certificate could be issued if they are confirmed to be dead. In any case, such a certificate is issued after seven years. We had a program to address this issue earlier, but the last government had stopped it. The issue is when the missing people sometimes appear from places like Canada.”

A wartime veteran reporter asked, “Why has your Government not highlighted in Geneva that the Commander of the Army that is accused of killing 40,000 civilians was endorsed as the 2010 Presidential Candidate by the TNA and that he won from all the Northern and Eastern provinces?”

The President acknowledged the question with a smile for it was obvious that the question was intended to highlight the ludicrousness on which the UNHRC Resolution 30/1 was based on.