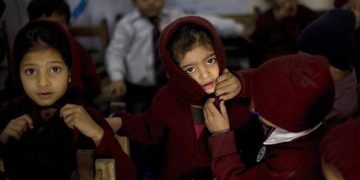 One in four children in Pakistan will remain uneducated by 2030: UNESCO

One in four children in Pakistan will remain uneducated by 2030: UNESCO A Pakistani student fixes the head scarf of her friend at a school in Rawalpindi, Pakistan. Without rapid acceleration, globally, 20% of young people and 30% of adults will still be unable to read by the deadline. | Photo Credit: AP

July 10 (PTI) – One in four children in Pakistan will not be completing primary education by the 2030 deadline of the world’s Sustainable Development Goals (SDGs), according to new projections by UNESCO.

The new projections of the United Nations Educational, Scientific and Cultural Organisation (UNESCO) show that Pakistan will only be half-way to the target of 12 years of education for all, with 50% of youth still not completing upper secondary education at the current rates, the Dawn newspaper reported Wednesday.

Countries need to face up to their commitments. What’s the point in setting targets if we can’t track them? Better finance and coordination are needed to fix this data gap before we get any closer to the deadline, Silvia Montoya, Director of the UNESCO Institute for Statistics said. The new UNESCO projections prepared for the UN High-level Political Forum show that the world will fail its education commitments without a rapid acceleration of progress.

The 2030 Agenda for Sustainable Development emphasises leaving no-one behind yet only 4% of the poorest 20% complete upper secondary school in the poorest countries, compared to 36% of the richest. The gap is even wider in lower-middle-income countries. In 2030, when all children should be in school, one in six aged 6-17 will still be excluded. Many children are still dropping out: by 2030, 40% will still not be completing secondary education at current rates, the media report said.

The new global education goal, SDG-4, calls on countries to ensure that children are not only going to school but also learning, yet the proportion of trained teachers in sub-Saharan Africa has been falling since 2000.

At the current trends, learning rates are expected to stagnate in middle-income countries and Latin America, and drop by almost a third in Francophone African countries by 2030. Without rapid acceleration, globally, 20% of young people and 30% of adults will still be unable to read by the deadline.

Countries have interpreted the meaning of the targets in the global education goal very differently. This seems correct given that countries set off from such different starting points. But they must not deviate too much from the promises they made back in 2015,” Manos Antoninis, Director of the Global Education Monitoring Report, said.