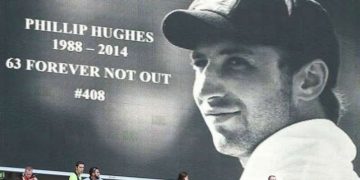 The death of Phillip Hughes rattled administrators, former players and there was a massive debate around the legitimacy of bouncers November 27 (DNA) – Phillip Hughes, who had starred for Australia by becoming the youngest to score centuries in both innings of a Test match in South Africa in 2009, plunged the entire cricketing world in shock and despair when he died on November 27, 2014 at the age of 25 after being hit on the side of the neck by Sean Abbott in a Sheffield Shield Game between South Australia and New South Wales at the Sydney Cricket Ground.

The death of Phillip Hughes rattled administrators, former players and there was a massive debate around the legitimacy of bouncers. It forced a change in the way helmets were designed to protect batsmen.

Phillip Hughes was seemed visibly dazed. A couple of seconds elapsed and the batsman stood still. However, a couple of seconds later, to everyone’s shock, Phillip Hughes collapsed. The support staff and medical team rushed on to the field and the players too assisted them in carrying an unconscious Hughes back to the pavilion. Players and authorities realised the same and decided to halt the game.

Phillip Hughes was airlifted to a hospital in Sydney and surgery commenced. Two full days passed, and there were no positive reports emerging from the hospital. Cerebral haemorrhage meant that chances of survival were slim. On November 27, Phillip Hughes died.

The sadness that enveloped the cricketing world was a moving sight. Prime Minister Tony Abbott attended the funeral in Phillip Hughes’ hometown of Macksville. The Indian cricket team, who were in Australia at that time, also attended the funeral and the Test series was postponed and reshuffled slightly.

All over the world, people put out out a bat and a cap on top of the handle as a tribute to Phillip Hughes. On the day Phillip Hughes died, the New Zealand and Pakistan teams decided to have a rest day and mourn the death of the batsman in Sharjah.

For a couple of games and even for the ICC Cricket World Cup 2015, Phillip Hughes was made the unofficial 13th and 16th man in the Australian cricket team. Michael Clarke, the Australia captain at that time, wore a black armband throughout that period and forever remembered his ‘brother’ Phillip Hughes.

In 2016, after an official inquest, the event was deemed an accident, that did not involve any players or umpires. However, cricket changed. The helmets now have an extra layer of safety with the side grill that protects the side of the neck.

Bouncers are still being delivered at a rapid rate even today. But, on November 27, 2014, cricket had seen a tragedy unlike any in the modern era.