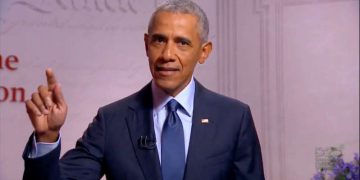 August 21 (The Guardian) – Barack Obama has delivered his most scathing attack on Donald Trump, accusing the US president and his enablers of trying to suppress the vote in November’s election and making the heartfelt plea: “Don’t let them take away your democracy.”

In the most withering critique by a former president on his successor in modern times, Obama made the case that Trump, a billionaire businessman and celebrity, has not grown into the job of president because he cannot, and instead treats it as a reality TV show.

His grave address mentioned the word “democracy” 18 times and offered a stark warning: “This administration has shown it will tear our democracy down if that’s what it takes to win. So we have to get busy building it up.”

Obama, the country’s first Black president, spoke on the third night of the virtual Democratic national convention just before Senator Kamala Harris of California became the first Black person to be formally nominated for vice-president by a major party and promised to fight with conviction and hope.

Obama spoke from the symbolic location of the Museum of the American Revolution in Philadelphia. The words “Writing the constitution” were displayed on an exhibit wall behind him. The absence of cheering crowds that greeted him at past conventions, including two successful presidential nominations, fitted the sombre occasion.

This time, Obama argued, the election is not merely a battle of blue versus red but for the survival of democracy itself. “What we do these next 76 days will echo through generations to come,” he said.

Obama noted that he had sat in the Oval Office with both men who are running for president and said sardonically he had hoped that Trump might “show some interest in taking the job seriously … But he never did.

“For close to four years now, he’s shown no interest in putting in the work; no interest in finding common ground; no interest in using the awesome power of his office to help anyone but himself and his friends; no interest in treating the presidency as anything but one more reality show that he can use to get the attention he craves. Donald Trump hasn’t grown into the job because he can’t.”

The consequences, he continued, were 170,000 Americans killed by the coronavirus pandemic, millions of jobs lost while the rich get richer, “our worst impulses unleashed, our proud reputation around the world badly diminished, and our democratic institutions threatened like never before”.

“Joe and Kamala have concrete policies that will turn their vision of a better, fairer, stronger country into reality,” he said. “But more than anything, what I know about Joe and Kamala is that they actually care about every American. And they care deeply about this democracy.”

Even as Obama spoke, Trump tweeted angry retorts in all caps. Obama said he understands why many people are down on government and wondering: what’s the point?

“Well, here’s the point,” he said. “This president and those in power – those who benefit from keeping things the way they are – they are counting on your cynicism. They know they can’t win you over with their policies. So they’re hoping to make it as hard as possible for you to vote, and to convince you that your vote doesn’t matter.

“That’s how they win. That’s how they get to keep making decisions that affect your life, and the lives of the people you love. That’s how the economy will keep getting skewed to the wealthy and well-connected, how our health systems will let more people fall through the cracks. That’s how a democracy withers, until it’s no democracy at all.”

He called on Americans to make plan now on how to get involved and how to vote: “What we do echoes through the generations.”

Obama apart, the night belonged to Democratic women across generations, from host Kerry Washington to singer Billie Eilish, from House speaker Nancy Pelosi to former congresswoman Gabby Giffords, who was shot in the head in Tucson, Arizona, nearly a decade ago yet survived and now found the courage, grit and determination to speak about resilience and even play a French horn.

In a sign of how much has changed in the pandemic, Harris introduced herself to the nation in a sparsely attended auditorium in Wilmington, Delaware. She was applauded by supporters on a giant video screen. When nominee Joe Biden walked out, he remained physically distanced and could not embrace her.

Harris, the daughter of immigrants from Jamaica and India, sketched out her personal biography. “My mother taught me that service to others gives life purpose and meaning. And, oh, how I wish she were here tonight. But I know she’s looking down on me from above. I keep thinking about that 25-year-old Indian woman – all of five feet tall – who gave birth to me at Kaiser Hospital in Oakland, California.

She went on: “On that day, she probably could have never imagined that I would be standing before you now speaking these words: I accept your nomination for vice-president of the United States of America.”

She, too, lambasted Trump but also offered hope. “There’s something happening, all across the country,” she said. “It’s not about Joe or me. It’s about you. It’s about us. People of all ages and colors and creeds who are, yes, taking to the streets, and also persuading our family members, rallying our friends, organizing our neighbors, and getting out the vote.”

Democrats are seeking to capitalise on a “gender chasm” between the parties. Women support Biden by 56% to 40%, roughly the same as their margin for Hillary Clinton over Trump in 2016, according to a Washington Post-ABC News poll. Wednesday night’s programme seemed calculated to ram home that advantage.

Harris’ nomination also marks the elevation of Black women in a Democratic party that has for decades relied on their electoral power but whose loyalty was rarely reflected in leadership. In the aftermath of the police killing of George Floyd in May, which sparked a national reckoning on racism, Biden faced pressure to choose a Black woman as his running mate.

But there was also a rueful look in the rearview mirror. Clinton wore suffragette white just as she did at her triumphant convention in 2016. Instead of the wildly enthusiastic crowds in Philadelphia anointing her as a likely future president, now she was alone at her home in Chappaqua, New York.

She said of Trump: “For four years, people have said to me, ‘I didn’t realise how dangerous he was.’ ‘I wish I could go back and do it over.’ ‘I should have voted.’ This can’t be another woulda-coulda-shoulda election.”

Clinton made reference to her own defeat in the electoral college, in spite of winning the popular vote, and fears that Trump will sow chaos and distrust in the process in a bid to claim victory again. “Remember: Joe and Kamala can win three million more votes and still lose. Take it from me. We need numbers so overwhelming Trump can’t sneak or steal his way to victory.”

Senator Elizabeth Warren, who finished third in the Democratic primary, spoke from the Early Childhood Education Center in Springfield, Massachusetts, which has been closed for months due to the coronavirus pandemic. In another display of party unity, she said: “Joe and Kamala will make high-quality child care affordable for every family, make pre-school universal, and raise the wages for every childcare worker.”

Videos produced for the third of the virtual convention included 11-year-old Estela Juarez from Florida, reading a letter she wrote to Trump after her mother – who married a US American marine with whom she had two American children – was deported to Mexico in an indictment of the president’s harsh immigration policies.

Another montage celebrated this week’s centenary of women winning the right to vote, weaving together footage of women marching throughout American history, including the historic women’s march that came a day after Trump’s inauguration.