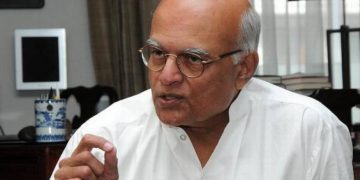 “It’s not in India’s interest to appoint a government in Maldives,” says Shivshankar Menon

“It’s not in India’s interest to appoint a government in Maldives,” says Shivshankar Menon “I don’t see if it is in India’s interest to appoint a government in Maldives,” said Menon, who served as the country’s national security adviser from 2011 to 2014 under former Prime Minister Manmohan Singh.

Delivering a guest lecture at Pragyan, the annual techno-managerial festival of National Institute of Technology, Tiruchi, Menon, who had also served as the Foreign Secretary, said there is a view that India should have interfered in solving the crisis in the Maldives.

“This is not a case of mere intervention,” he said.

Th former President of Maldives, Mohamed Nasheed wants India to move in, throw out the present government and put him back in power.

Though Nasheed had asked for India’s intervention, Menon said the country has to study various aspects of the crisis, Menon said.

The current situation is  not the same when India sent its troops to Maldives to neutralize the People Liberation Organisation of Tamil Eelam (PLOTE) ‘s attempt to stage a coup against then President Maumoon Abdul Gayoom in 1988. Sensing danger, Gayoom had sought the intervention of countries such as India and the United States of America.

After the original state of emergency expired, president Yameen had got the parliament contentiously extend it by another 30 days.

(The featured image at the top is that of Shivshankar Menon, former Foreign Secretary and National Security Adviser to the  Indian government)