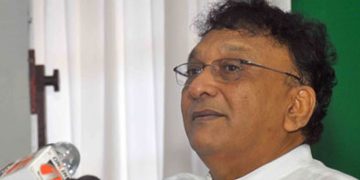 Colombo, August 6: A senior Sri Lankan cabinet Minister has denied the opposition contention that government has agreed to an Indian proposal to construct a bridge across the Palk Strait from Thalaimannar to Rameswaram, The New Indian Express reports.

The Minister of Higher Education, Lakshman Kiriella, told an audience in Kegalle on Friday, that when the Sri Lankan government  has to build so many bridges within the island itself, there is no sense in  building  one to India.

Kiriella charged that the opposition is trying to exploit one issue after the other to discredit the government. Till the other say it was the VAT issue and now it is the “Hanuman Bridge” ( as the Indo-Lanka bridge is called). The opposition is hanging on to “Hanuman’s tail” in sheer desperation, he said.

The idea of building a bridge across the Palk Strait was mooted by Ranil Wickremesinghe when he was Prime Minister between 2002 and 2004. He called it the “Hanuman Bridge”. With the cooperation of  Sri Lankan and South Indian Chambers of Commerce, workshops were organized in Colombo and Chennai. Wickremesinghe also got a technical blueprint done by Sri Lankan engineers.

But Wickremesinghe’s move received heavy flak from Sri Lankan nationalists who felt that the land link would open the floodgates to illegal Indian immigration, which was a major problem in the 1950s and 1960s.Used to low wages, Indians will take jobs in Lanka on low salaries, driving locals out of work, they said.

Between 2004 and 2014, there was no move to build the bridge as neither New Delhi nor Colombo was keen on it. But when the BJP came to power in 2014, Transport and Highways Minister Nitin Gadkari announced that a bridge will be built across the  Palk Strait to be part of the Asian Highway and that the ADB will fund it.

This revived the controversy in Sri Lanka, giving the opposition a stick to beat the incumbent Prime Minister Ranil Wickremesinghe with. It was assumed that Wickremesinghe was for the bridge. But the fact was that he had abandoned the unpopular plan. When media reports said that Wickremesinghe discussed the bridge project with Gadkari during a visit to New Delhi, he denied it. His line has been that the Indians have not officially told him about their plans to build a bridge and the government has not received any proposal to this effect from India.