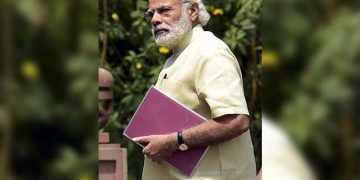 No Indian territory is under Chinese occupation, says Modi’s office

No Indian territory is under Chinese occupation, says Modi’s office New Delhi, June 20 (The Hindu): The Indian Prime Minister’s Office (PMO) on Saturday clarified that no part of India’s territory is under Chinese occupation, but that the statement made to the All-Party Meet (APM) was also a reference that the state of affairs was a “consequence of the bravery of our soldiers” pointing to the June 15 violent face-off between Indian and Chinese troops in East Ladakh that left 20 Indian soldiers dead.

In his closing remarks at the APM, Mr. Modi categorically stated that “neither is anyone inside our territory nor is any of our post captured.”

This statement had led to questions by the Congress on the reasons why 20 soldiers died in a clash with the Chinese in Galwan valley, if there was no intrusion and the continuing military level talks to defuse the situation on the Line of Actual Control (LAC). In Saturday’s clarification, the intrusion is acknowledged as having occurred and then repulsed by Indian soldiers, hence currently no intrusion exists on India’s western border with China.

“Attempts are being made in some quarters to give a mischievous interpretation to remarks by the Prime Minister to the APM yesterday,” said a press release from the PMO.

“Prime Minister was clear that India would respond firmly to any attempts to transgress the Line of Actual Control [LAC]. In fact he specifically emphasised that in contrast to the past neglect of such challenges, Indian forces now decisively counter any violations of LAC. The APM was also informed that the Chinese forces have come in much larger strength to the LAC and that the Indian response is commensurate. As regards transgression of LAC, it was clearly stated that the violence in Galwan on June 15th arose because Chinese side was seeking to erect structures just across the LAC and refused to desist from such action,” the statement said.

The focus of Mr. Modi’s remarks to the APM discussions were the events of June 15 that led to the loss of lives of 20 Indian soldiers. “The Prime Minister’s observations that there was no Chinese presence on our side of the LAC pertained to the situation as a consequence of the bravery of our armed forces,” it stated.

“What is Indian territory is clear from the map of India. This government is strongly and resolutely committed to that. In so far as there is some illegal occupation, the APM was briefed in detail how over the last 60 years more than 43,000 square kilometres has been yielded under cirumstances with which the country is well aware. It was also made clear that this government will not allow any unilateral change of the LAC,” said the statement, also taking aim at the Congress.

The statement did acknowledge that the overall sentiment of the APM was of unequivocal support to the government and the armed forces at a time of national crisis, and that the “unfortunate and unnecessary controversy” being created to “lower morale” will not be allowed to undermine the confidence of people.

Nearly 20 presidents of mainline Opposition parties met with the Prime Minister at the APM, and expressed support to the government and the Army and asked for the restoration of status quo ante at the borders.