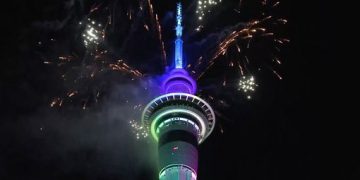 by Editor
in Around The World, Lifestyle, World
Reading Time: 2 mins read
6 0 December 31 (Mirror) – New Zealand has entered 2020 and a new decade with fireworks and huge celebrations in Auckland and Wellington.

The clock struck midnight an hour after Samoa and Christmas Island, an Australian territory, were the first to enter the new year.

Up next is eastern parts of Australia, including Sydney, where its spectacular harbour fireworks show is going ahead despite the deadly bushfire crisis and calls for the event to be scrapped.

In the UK, London’s show will feature 12,000 fireworks, including 2,000 fired from the London Eye on the River Thames, and Big Ben’s chimes for the first time in a year amid renovation work.

Outlying American islands in the South Pacific, which are just east of the International Date Line, will be the last to welcome 2020 – at 12pm UK time on Wednesday, exactly 25 hours after Samoa.

Despite being just 50-some miles away, the US state of Alaska, which is on the other side of the International Date Line, won’t usher in 2020 until 21 hours later (9am UK time on Wednesday).

Russia’s Far East will be followed by eastern parts of Australia, including Sydney, at 1pm UK time.

Australia’s celebrations are overshadowed by a deadly bushfire crisis that has forced a number of cities and towns to cancel their fireworks.

Sydney controversially pressed ahead with its plans and was granted a total fire ban exemption.