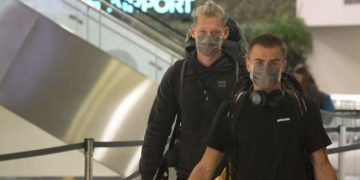 New Zealand PM: No open borders for ‘a long time’

New Zealand PM: No open borders for ‘a long time’

New Zealand Prime Minister Jacinda Ardern says the country will not have open borders with the rest of the world for "a long time to come". Tourists leaving Christchurch on a special flight on 8 April

May 5 (BBC) – Ms Ardern was speaking after attending part of Australia’s cabinet meeting via video link.

The meeting discussed a possible “trans-Tasman bubble”, where people could go between Australia and New Zealand freely, and without quarantine.

But she said visitors from further afield were not possible any time soon.

Both Australia and New Zealand have closed their borders to almost all foreigners as part of their Covid-19 response.

What did Jacinda Ardern say?

Ms Ardern said New Zealand and Australia were discussing a “bubble of sorts between us, a safe zone of travel”.

She stressed there was “a lot of work to be done before we can progress…but it’s obviously been floated because of the benefits it would bring”.

But, in response to a question about the country’s tourism sector, Ms Ardern said: “We will not have open borders for the rest of the world for a long time to come.”

Tourism is one of New Zealand’s biggest industries, directly employing almost 10% of the country’s workforce, and contributing almost 6% of GDP.

Most visitors are from Australia, followed by China, the US, and the UK.

What is the virus situation in Australia and New Zealand?

Ms Ardern said any “trans-Tasman bubble” was only possible because of “the world leading actions” of both countries.

On Tuesday, New Zealand reported no new cases for the second day in a row.

It has had fewer than 1,500 confirmed cases in total, and only 20 deaths. Last week it eased its lockdown from Level 4 to Level 3.

Australia – which has a population of around 25 million, five times that of New Zealand – has had almost 7,000 cases and 96 deaths.

But it, too, has “flattened the curve” of infections, and various states and territories have also eased their lockdowns.