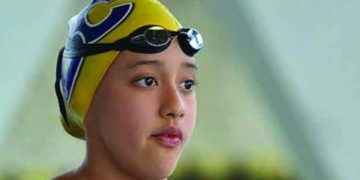 Aug 3 (NIA) – Nepal’s 2015 earthquake survivor, Gaurika Singh imprinted her name in the history books by becoming the youngest athlete of the 31st Olympic Games scheduled for August 5 to 21 in Rio de Janeiro, Brazil.
13 year old Gaurika was named the youngest athlete among the over 10,000 athlete to compete in Rio Olympics, according to the official Rio Olympics website. She was born in 2002 in Nepal but currently lives with her parents in London.
“She’s special. It’s unbelievable that she’s the youngest Olympian in Rio and amazing how she copes with all the pressure,” her father Paras, a urologist at Royal Free Hospital in London, was quoted as saying by the website.
“I wanted to go (to Rio) but wasn’t sure I’d be able to because I’d be too young,” said the five-foot-one athlete. “When I found out a month ago, it was a big shock.”
Gaurika will compete in 100m backstroke heats on Sunday and hopes to better her national record of 1:07.31 in the event in Rio.
During the 12th South Asian Games held in Assam and Guwahati in India early this year, Gaurika won one silver (200m individual medley) and three bronze medals (200m backstroke 100m backstroke, 400m freestyle).
She now hopes to win in Rio to make her country proud.