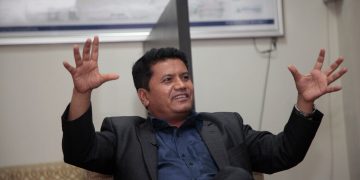 Kathmandu, February 27 (Nepali Times): An Air Dynasty helicopter carrying Tourism Minister Rabindra Adhikari among others, has crashed in Taplejung killing all seven on board. Nepal Police have recovered six bodies at the accident site.

Among the six passengers were minister Adhikari’s private secretary Yuvaraj Dahal, Yeti Airlines’ director Ang Chhiring Sherpa, and one security person. They were headed to Athrai rural municipality at Chuhandanda in Tehrathum to study about a proposed airport.

Police and local residents heard a loud explosion from the accident site in Taplejung which was ablaze with fire. A Simrik Air helicopter from Itahari and another helicopter from Kathmandu have been deputed for rescue and relief, according to Balkrishna Pandit, operations manager of Air dynasty.

The Prime Minister’s office has called for an emergency meeting with the cabinet after the news broke.

(The featured image at the top is that of Rabindra Adhikari, the Nepalese Minister for Tourism)