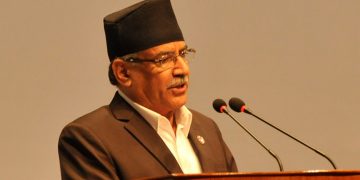 Kathmandu, September 14 (NIA):  Nepalese Prime Minister Pushpa Kamal Dahal will begin a four-day visit to India on Thursday, his first trip abroad after assuming office, with hopes of achieving the  aim of balancing India and China .But opponents have warned him against giving in to India’s “hegemonic” demands.

Commenting on the visit, Nepali Times said: “Dahal must clearly put forth Nepal’s concerns, but avoid mixing our internal affairs with bilateral issues. Amending the Constitution to address Madhesi demands, most importantly redrawing boundaries of federal provinces, is a domestic affair, and it needs to be addressed internally. Dahal must not involve India in deciding when and how to do it.”

“Dahal must focus on points that were previously agreed upon but not implemented. Nepal and India have failed to prepare a joint Detailed Project Report of the Pancheswor Multipurpose Project even after inking a deal on it. Expediting the construction of the Tarai Feed Road is discussed every time Nepal’s Prime Ministers visit India, but it remains neglected.”

“Dahal must also raise issues of inundation and encroachment by India. But he must not promise anything on the contract of the Kathmandu-Tarai Fast Track to any Indian company.”

“Dahal must not sign new agreements without proper groundwork, and it is equally important for the ruling Maoist-Nepali Congress coalition to win the main opposition United Marxist Leninist’s  trust on this matter. If he signs new deals imposed upon him without understanding their nitty-gritty they will be disastrous for the country,” Nepali Times warned.

Meanwhile, in a report from New Delhi Reuters said that India is likely to offer Nepal’s new Prime Minister help in building an East-West railway line and better access to its ports.

Dahal, also known by his Maoist name, Prachanda, has chosen New Delhi as his first foreign stop, seeking to rebalance ties that chilled under his pro-China predecessor,K.P. Oli. Oli had sealed trade deals that sought to reduce landlocked Nepal’s economic dependence on India.

“Relations with India have become frosty for some time. I want to remove the bitterness,” Dahal told reporters on Tuesday evening in Kathmandu, adding India now “wants to help Nepal, which is in difficulties”.

A new republican constitution is still a source of rancor for the southern plains people called Madesis, who mounted a five-month border blockade that ended earlier this year. The Madesis’ demand is backed by India.

The country’s last government said the fuel and trade embargo had the tacit backing of India — a charge New Delhi has denied.

Dahal said that  in New Delhi,he would discuss the railway line stretching from Mechi in east Nepal to Mahakali in the west that India will help build.

An Indian railway official said the project that runs parallel to Nepal’s 1,030 km east-west highway has been talked about in the past, but now the two countries are discussing financial terms.

The mountainous country has only one short rail line from Jaynagar on the Indian border to Janakpur.

Another possible project, Dahal said, is a hydro-electric power plant that could be built with Indian grant aid.

Nepal is one of several South Asian countries where India and China are vying for influence. India has long considered Nepal’s 28 million people as a natural ally based on their close historical ties and long open border.

But China has gained a foothold, rapidly building roads and hospitals while there has been little progress on long-standing Indian proposals for hydro-electric plants and trade and transit corridors that became mired in political disputes.

It is part of a broader push by China into South Asia, including a $46 billion economic corridor across India’s neighbor and rival Pakistan, and investment in a port in Humbantota in Sri Lanka.

However, in July, Oli stepped down after months of stalemate over the new charter, which experts said underlined the vulnerability of governments in Kathmandu that take a stridently anti-India line. Dahal may have chosen to come to Delhi first for that reason.

“It is the politicians’ understanding that without keeping India in good humor they cannot remain long in power,” said Guna Raj Luitel, editor of the Nagarik daily.

Too Dependent To Antagonize India

India is still Nepal’s biggest trade partner, donor and supplier of essential goods, as well as the only source of fuel for the impoverished country that is struggling to recover from two earthquakes last year that killed 9,000 people.

The previous government very definitely coordinated with China more explicitly than earlier governments. But Dahal is making  a deliberate recalibration away from what the previous Prime Minister had planned.

Nepali media said Chinese President Xi Jinping had put off a visit planned for October due to lack of progress on Nepal’s part on the projects agreed between the two countries.

Nepal’s foreign ministry denied any cancellation but gave no date for the visit. So did the Chinese .

Chinese Foreign Ministry spokeswoman Hua Chunying would not directly confirm that Xi’s October visit to Nepal had been cancelled, but said instead that exact dates had not been set.

“The term ‘cancelled visit’ is not very accurate, because the two sides are maintaining communication on high-level bilateral exchanges through diplomatic channels,” Hua told a regular press briefing in Beijing on Monday.

According to Annapurna Post said Beijing is unhappy about Nepal’s tardy progress on its “One Belt, One Road” initiative, Xi’s signature project to build out infrastructure and establish new trade routes across the region.

“Nepal should have moved faster on these projects as they are in our long-term interest. By now we should have submitted concrete proposals to the Chinese side on them,” Mahesh Maskey, a former Nepali envoy to China, told Reuters.