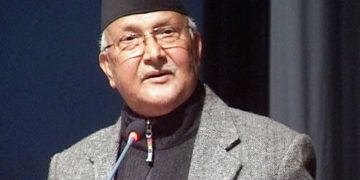 July 25 – The Communist Party of Nepal, on Monday, said that it had begun the preparatory work to form a national consensus government, hours after Nepal’s Prime Minister K.P. Oli tendered his resignation.

Communist Party of Nepal (Maoist Centre) Spokesperson, Pampha Bhusal told journalists that her party was confident that other Communist leaders would also join them in support to form a national government.

“It is only a matter of time before Baburam Bhattarai, Mohan Baidya and Netra Bikram Chand will join the Maoist Centre and work together for everybody’s benefits,” Bhusal said.

She further alleged that there was a presence of foreign interference in the mainstream political course of the country and also urged for implementation of the recently signed Nepal-China agreement regarding the opening of various borders between the two sides.

Oli resigned as the Prime Minister of Nepal on Sunday, just minutes before facing a no confidence vote which he was expected to lose.

Oli, 64, was forced to quit after allies of his multi-party coalition deserted the government, accusing him of not honouring power sharing deals that helped install him as prime minister nine months ago.

He is the eighth prime minister in Nepal in the past 10 years.

Media reports said that Nepal’s President Vidhya Devi Bhandari is expected to give political parties seven days to agree on a candidate for prime minister on the basis of political understanding. If this fails, lawmakers will then attempt to elect a new leader on the basis of a majority in Parliament.