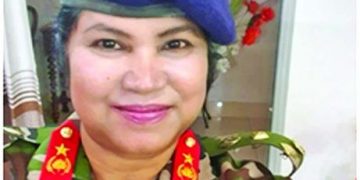 A medical officer, Nazma was the first female contingent commander in the history of the United Nations. Share on WhatsApp
Dhaka, October 9: Bangladesh Army is decorated with its first female Brigadier General from medical administration (non-specialist). In this vibrant time of women’s empowerment this is an important achievement and a milestone of progress in women emancipation. Brigadier General Nazma Begum was the first female field ambulance commander in the history of Bangladesh Army.
Nazma Begum was the first female Assistant Director of medical services. She was the first female contingent commander in the history of the United Nations. She is the only female in the world’s history who commanded a level-2 hospital twice and the only female in history who was the country senior twice in the mission areas. She was the first female in the history of Bangladesh Air force who commanded the medical squadron twice ( base Zohur and base Bashar).
In United Nations she was awarded with Force Commander’s commendation, commendation from special representative of UN Secretary General, commendation from army chief of Central African Republic, commendation from Defense Minister of Central African Republic and so on. She was also nominated for military gender advocate award for the year 2016 and 2019. She played a role model in woman empowerment and was recognized with honour throughout the world.
SendShare4Tweet1ShareShare