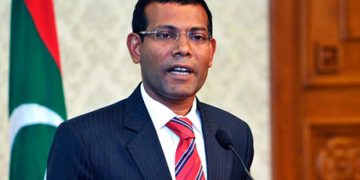 Colombo, September 14 (NIA): The head of the Maldivian Democratic Party (MDP) and former Maldivian President Mohamed Nasheed has said that the anti-Yameen democracy movement in his country wants the Security Forces to cooperate with it but not to stage a military coup.

Nasheed told the Foreign Correspondents’ Association of Sri Lanka through Skype on Tuesday that the “restore democracy” movement wants to oust President Abdulla Yameen through legal and constitutional means.

“A military coup is not legal,” he said.

Specifying the expected role of the Security Forces in this movement, Nasheed said that they could allow anti-Yameen demonstrations to take place without undue curbs. He regretted that recently three office bearers of the MDP were taken into custody. But he was confident that the Security Forces can help because a section of them are alienated from the corrupt and arbitrary rule of Yameen.

According to Nasheed, the time is ripe for a overthrow of the Yameen government because Yameen is not able to carry with him sizeable sections of his own party, the parliament, and his own family. His own half brother Maumoon Gayoom and the latter’s children are not with him.

Asked how he could expect Gayoom, who had been dictatorial as President of Maldives, and had jailed him, to side with him now, Nasheed said that Gayoom realizes that the future of his children and of the Maldivian people lies in the restoration of democracy and good governance. Nasheed also said that Maldivians should not be tied to the past but look to the future.

Asked about the long time being taken to bring about a regime change when the expectation was that it was only weeks away, Nasheed said that the required political alliances are yet to take shape and Yameen’s repression is keeping people from coming out to demonstrate.

He could not answer the question if the fault lay in the absence of key opposition leaders (like him) from the Maldives. He along with some of this colleagues are in the UK and the last opposition leaders’ meeting took place in Colombo and not Male.

Asked if the regime change will be brought about with the help of foreign powers, Nasheed said that foreign powers can support the democracy movement in various ways but the movement is not depending on foreign powers. However, the Maldivian opposition wants the international community to apply “targeted sanctions” against the Yameen regime and ban his travel to various countries.

Asked whether  Yameen is banking on China’s support, given the Chinese investments in the Maldives, Nasheed admitted that no country is backing Yameen. But countries find it easier to work with some governments. At any rate, the democracy movement does not depend on foreign countries destabilizing Maldives.

On the role of India and Sri Lanka, Nasheed said that they are concerned about the state of affairs in the Maldives but countries have their ways of conducting foreign relations. Specifically on Sri Lanka he said that the movement is following the Sri Lanka model of democratic restoration (the Yahapalanaya movement of President Maithripala Sirisena and Prime Minister Ranil Wickremesinghe).

On the policies of a post-Yameen government, Nasheed said that the “unity government that will be formed will be primarily concerned with the restoration of democratic institutions and not economic development. After the restoration of democracy in the country’s institutions, elections will be held and the group which is elected will formulate developmental policies.