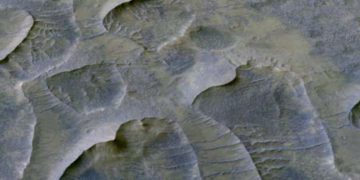 Scientists have discovered a windswept field of solid sand, which turned to rock roughly a billion years ago.

October 9 (ScienceAlert) – Tucked away in a canyon on Mars, scientists have discovered a windswept field of solid sand, which turned to rock roughly a billion years ago.

Despite being heavily eroded, this frozen plain of palaeo-dunes has withstood time remarkably well, much more so than fossilised waves of sand on Earth, which are subject to the whims of wind, water, and the shifting landscapes of deep time.

Understanding how these duneforms stood the test of time could give us insight into the sedimentary processes on Mars and reveal something about the planet’s geologic history at the same time.

“This level of preservation is rare for terrestrial sand dunes due to ongoing erosion and tectonics,” explains planetary scientist Matthew Chojnacki from the Planetary Science Institute.

“Based on the dune deposit’s relationships to other geologic units and modern erosion rates we estimate these to be roughly a billion years old.”

Today on Mars, sand dunes, whipped up by wind, are a common feature, and the size and arrangement of those fixed in place in the widest part of the Valles Marineris canyon – the Melas Chasma – look remarkably similar to ones formed more recently.

This suggests the climate and atmosphere on Mars has changed little in a very, very long time. Astronomers say the orientation, length, height, shape and slope of the Melas Chasma palaeo-dunes all resemble recently-made waves of sand seen elsewhere on the Red Planet.

“This indicates the major wind directions that are responsible for the dunes’ shape have not changed substantially over time,” Chojnacki told EarthSky.

Although the topography of this canyon is still incomplete, as some of the dunes have eroded away or been buried, the paleo-dunes we can decipher “do not paint a dramatically different picture than what can be gained from their modern counterparts,” the researchers explain.

The authors found some dunes were buried under tens of metres of material, which appeared to come from a catastrophic volcanic event.

Sometime afterwards, the authors predict, a volatile compound came into contact with the compacted sand dunes and helped harden them, freezing the waves in time as they migrated across the Melas Chasma.

This same sort of process can be seen on Earth when groundwater invades a partially buried sand dune – formed layers of lithified sand like those famous striped structures seen in Zion National Park. Unlike our planet, however, lithified sand dunes on Mars have far fewer elements to contend with.

In the absence of water, vegetation or plate tectonics, exposure to trade winds is the main eroder on Mars, and over deep time, this has helped chisel back the volcanic shell that once covered these dunes.

The mere existence and degree of preservation seen in these dunes indicates an important difference in the landscape evolution of Earth and Mars.

While ancient lithified sand dunes on Earth are rare to find and much more eroded, the Melas Chasma appears to possess “extensive paleo-dune fields scattered across the basin floor, where many duneforms and their morphology appear largely intact.”

“Water and tectonics that constantly reshape the surface of Earth are not currently a factor on Mars, thus there is an opportunity to learn from the geologic record of the red planet,” says Chojnacki.

“These results inform us that wind-driven sand transport, deposition, and lithification have occurred throughout much of Mars’ recent history and illustrate how landscape evolution there greatly differs compared to that of Earth.”

The study has been published in JGR Planets.