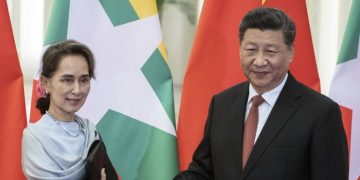 Myanmar might end up walking the tightrope, like other nations in South Asia, which are facing pressure from India and China. Myanmar is on the horns of a dilemma. The basic question facing the National League for Democracy (NLD) government headed by  Aung San Suu Kyi, is whether it should look to China for succour and support to face the mounting pressure from the West on the ticklish issue of the Muslim Rohingyas, or look to the West to free itself from the military’s yoke and establish a full-fledged democracy.

The dilemma is not easy to resolve because both the East (China) and the West (led by the US) can put pressure on the regime in Yangon in pursuance of their respective agendas.

The West still holds the key to Myanmar’s international acceptance as a responsible State wedded to democracy, equality and human rights, which are key parameters in this day and age. But the West’s meddling in the internal affairs of Myanmar, and its supercilious, if well-meaning, diktats on the Muslim Rohingya issue run counter to Myanmar’s concept of national sovereignty and the Burmese-Buddhist idea of “nationhood” which sees the Rohingyas as alien Bengali migrants, who also practice an alien religion, Islam.

China, on the contrary, is openly supporting Myanmar on the Rohingya issue and is financing major infrastructural projects which the West has not offered to execute. But Beijing is not entirely benign. It has a hold on some of the rebel ethnic groups on the Myanmar-China border which it can activate to twist Myanmar’s arms when needed. It could also put Myanmar in a debt trap through some of its grandiose projects and make it sign away key assets.

However, given the pluses and minuses, Myanmar might end up walking the tightrope, like other nations in South Asia, which are facing pressure from India and China.

Last week was very embarrassing for Myanmar as the International Court of Justice (ICJ) at The Hague dictated precautionary measures to prevent “further genocidal” actions against the Rohingya Muslims. The ICJ ordered Myanmar to follow four provisional measures: prevent further genocidal acts against the Rohingya Muslims; ensure that the military and any of its auxiliary organisations do not commit genocidal deeds; take effective measures to prevent the destruction of and ensure the preservation of evidence of genocidal crimes; and report back to the Court within four months on the progress achieved. Following that, there should be a report every six months, the Court added.

It is said that Myanmar must comply with the ICJ’s ruling or else it will be referred to the UN Security Council. However, the Court did not explicitly say whether there was “genocide”, as that is yet to be established and establishing it may take years.

Myanmar’s view, as expressed by State Counsellor (Prime Minister) Aung San Suu Kyi herself when she appeared before the ICJ, is that, there was no “genocide” as such, nor even “genocidal intent’. There were human rights violations, and some units of the military on some occasions had not followed operating procedures during the “clearing operations” meant to flush out ARSA ,the Rohingya terrorist group. These cases of rights violation are being investigated and action is being taken through the establishment of Courts Martial, she said.

Such violations were mentioned in the report of the government’s own Independent Commission of Enquiry (ICoE) which was released ahead of the ICJ hearing. The ICoE admitted that: “war crimes, serious human rights violations, and violations of domestic law took place during the security operations between 25 August and 5 September 2017 in Rakhine State. The killing of innocent villagers and the destruction of their homes were committed by some members of Myanmar’s security forces through disproportionate use of force.” But at the same time, the ICoE added that the killings or acts of displacement were not committed with any intent or plan to destroy the Rohingyas.

There is no doubt that the Aung San Suu Kyi government is committed to implementing the ICoE’s recommendations as well as those of the  Kofi Annan Commission’s report, which came earlier. However, as Aung San Suu Kyi herself admitted before the ICF, the army is not easy to tame or bring around to accept its faults. And the majority of Mynamarese are also behind the army on the Rohingya issue.

Suu Kyi openly lamented that the present Myanmar’s constitution has given the power to the military (called the “Tatmadaw”) the power to negate decisions of the civilian government. She said this arrangement has to change in the future if Myanmar is to become a true democracy. But that cannot happen immediately she added. Suu Kyi also cautioned against handing over the Rohingya issue to an international tribunal before the local judicial process is exhausted.

There are other tough decisions Suu Kyi has to take to satisfy the ICJ. She has to grant the ICRC and other UN organizations immediate access to the Rakhine State, refugee camps and jails; She has to close the remaining refugee camps in Rakhine and resettle the displaced in areas of their choice. Suu Kyi also has to allow freedom of movement to the Rohingyas and grant them full-fledged citizenship, as without citizenship no rights can be guaranteed.

The million-dollar question is: “Will the army and the Burmese masses get rid of their fear about Islamic terrorism and allow Suu Kyi to take the steps she has to?”

To resist Western and UN pressure, Myanmar is cultivating China even as China is cultivating Myanmar to extend its Belt and Road Initiative (BRI). There is a mutual need which is at the bottom of Sino-Myanmar relationship.

Referring to ties with China as being conducted on an equal footing, NLD spokesman Monywa Aung Shin said: “Whether we like or not, we need to build good relationships with neighbouring countries”, adding that Myanmar and China did not have a vassal-master relationship. “The relationship with China is a win-win one. We are not inferior to China,” he said.

However, Myanmar is not putting all its eggs in the China basket. It knows about China’s nefarious links with some militant groups among the Christian tribes in the North on the Myanmar-China border. According to the South China Morning Post, (SCMP), in late November 2019, the Myanmar military seized a high-value cache of arms and ammunition from the Ta’ang National Liberation Army (TNLA) in Homein in Shan state. Part of the cache included an FN-6 shoulder-launched surface-to-air missile worth about US$75,000-US$90,000.

Major General Aung Zaw Aye, commander of the Tatmadaw North Eastern Command, told SCMP: “I wonder where they got the money to buy such a weapon.” And Major General Tun Tun Nyi, Vice-Chairman of Tatmadaw True News Information Team, said: “I’d say the TNLA has illegally acquired weapons from China.”

West Too Has Links With Yangon

Fortunately for Myanmar, the West is not altogether against it. According to SCMP, Japan’s ambassador to Myanmar, Ichiro Maruyama, has said that there had been no genocide in Rakhine. Japan and US are promoting “fiscally sound and sustainable economic development” in Myanmar, as an alternative to China’s opaque BRI. American companies are expressing interest in expanding their investments in Myanmar.

“Australia has continued with its defence engagements with Myanmar in non-combat areas and in June, an  Australian developer, Gold Coast KPMG, reportedly proposed a US$38 billion “new city” project in the suburbs of Sittwe, the capital of Rakhine state, the SCMP reports.