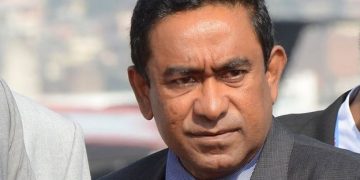 Maldivian President Abdulla Yameen has been on an Islamization drive to counter Western influence.

London, August 25 (BBC): Opponents of the Maldivian President Abdulla Yameen are looking to move against him within weeks, according to sources.

The President’s spokesperson confirmed to the BBC that the administration is aware of the moves” by those living outside  the Maldives.

Such a plot is “disingenuous to the people of the Maldives and in clear breach of international legal norms,” Ibrahim Shihab said.

The Maldives has seen frequent protests amid fears Yameen’s rule could see a return to its repressive past.

The details of what is being planned remain obscure, but when put to the government they described it as a “formal attempt at legally overthrowing the government”.

“As in every democracy it is the people, via the ballot, who will decide who will next take office,” a spokesman for the government said.

Yameen came to power in 2013. Under his rule, hundreds of political activists have faced charges and several senior figures have been given long jail sentences including Nasheed, who now lives in self-imposed exile in the UK.

‘Worst it’s ever been’

But despite heavy restrictions, rallies regularly take place against Yameen’s rule in the cramped streets of the capital, Male, away from the white sand beaches of tourist resorts.

Last Friday, hundreds of opposition activists gathered near the island’s artificial beach, loudspeakers blaring out opposition songs. An image of the President gazed down from a billboard close by.

There were some scuffles with the police, but heavy tropical rains sent most people to shelter. On the other side of the congested island, a weekly protest prayer was being held at a prominent mosque.

Many of the protesters agitated during  Gayoom’s time in office, pushing for a democratic transition, and are worried about losing their recently gained freedoms.

This month has already seen a strict defamation law come in to force, with stiff punishments for comments or actions considered insulting to Islam or which “contradict general social norms”, and tighter restrictions on demonstrations.

The death penalty is also being reintroduced, after a 60-year unofficial moratorium. The moves have drawn criticism from the UK, EU and the US.

“It’s the worst it’s been,” says Zaheena Rasheed, the editor of the Maldives Independent, a prominent English-language news website.

She says journalists are finding it increasingly hard to report in the current climate, and even operate at all. Three major news outlets have already closed this year.

One of her reporters, and an active blogger, went missing two years ago, and is thought to have been murdered. It is not clear who was responsible.

After his abduction, Rasheed received a message saying she would be next, and arrived at her office to find a machete embedded in the door.

“Journalists are already facing death threats, harassments, murder attempts,” she says. “Now we are seeing the courts and the laws silence journalists.”

The government defends the new defamation law, saying it seeks to “safeguard ordinary citizens against baseless allegations” and encourages a “higher standard of reporting”.

This month has already seen a strict defamation law come in to force, with stiff punishments for comments or actions considered insulting to Islam or which “contradict general social norms”, and tighter restrictions on demonstrations.

The government has said it remains committed to human rights, and that any legal action is a matter for the judiciary. But politically, Yameen has become increasingly lonely.

He is battling a broad opposition coalition led by his former deputy, Mohamed Jameel, and which includes former President Nasheed, now in exile in the UK.

Meanwhile, his own party has split, with a breakaway faction led by his half-brother and former ally, former President Gayoom. Last month, Yameen admitted that the break was a “gift” to the opposition.

“The people of the Maldives will find a way to get rid of this dictator,” says Eva Abdulla, an outspoken opposition MP, from her airy apartment in central Male.

Credible sources have told the BBC that moves will be made against the president soon.

“The feeling is there is no other way out of this,” one source said.

The President’s spokesperson confirmed to the BBC that the administration is aware of the moves” by those living outside  the Maldives.

Such a plot is “disingenuous to the people of the Maldives and in clear breach of international legal norms,” Ibrahim Shihab said.