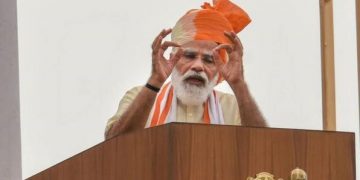 New Delhi, August 15 (The Hindu/newsin.asia): The Indian Prime Minister Narendra Modi in his Independence Day address from the Red Fort on Saturday said that security will be beefed up on India’s vast coastline and that its 1000 islands will be developed. India will also enhance its ties with West Asia and ASEAN he added.

Modi referred to the violent face-off between India and China in Eastern Ladakh stating that “whether it was the LAC (Line of Actual Control) or the LoC (Line of Control) , whenever anyone has tried to violate the territorial integrity of the country our jawans have answered the challenge in the same language as it was issued”.

The significance of mentioning the Line of Control (LoC or the border with Pakistan) and the LAC (Line of Actual Control, border with China) in the same breath was not missed by anyone.

He made a pitch for not just good relations with South Asian neighbours but also the wider neighbourhood beyond the immediate.

“West Asian countries with whom we have deep ties owing to energy security but also because many of our people live and work in these countries have been our long term friends and I want to thank them for the care they took of our people during the pandemic. ASEAN countries are also tied to us through cultural and trade ties and we are increasing our maritime cooperation,” Modi said.

Connectivity, he said, was an issue that was both economic and-security related and announced that Lakshadweep would get optical fibre connectivity in the next 1,000 days.

“Over 173 districts are on the coastline or a border with another country. The NCC will be raising a voluntary cadet force of nearly a lakh young people in these areas.”

He said 1,300 islands come under Indian territory and developing some of them would be a priority

Modi reflected the two big crisis the country is facing this year — the novel coronavirus pandemic and the attack on the borders by China in Eastern Ladakh. The virus could be a hindrance but that the nation was resolved to be self-reliant. “This is no time to be ordinary,” he added.

In a speech that lasted 90 minutes, the Prime Minister wove his government’s policies and programs as contributing towards meeting the health and economic challenges of the pandemic and also the security challenges at the border.

“The pandemic has brought home to us the importance of strong health systems and interventions. With this in view the government has conceptualized and will be launching a National Digital Health Mission that would give every Indian a health identity verifiable digitally and will work as each Indian’s health account,” he said.

“Every test, disease, diagnosis and medical report along with medicines will be stored in every citizen’s health ID.”

To much applause, Prime Minister Modi also announced that there were three vaccine candidates against the COVID-19 at various stages of trial in India.

“These vaccines are at various stages of trial and our scientists and researchers are hard at work,” he said. “Whenever any of these become viable for use, the government has already prepared an elaborate road map for its production and distribution in the shortest possible time,” he said.

He also became the first Prime Minister to talk of menstrual health and said 5 crore sanitary pads priced at ₹1 had been distributed through 6,000 Jan Aushadhi Kendras spread across the country.

He lauded the can-do spirit of the Indians especially in the face of a crisis like the pandemic by pointing out that when it had first hit, India had the capacity for only 300 tests a day and only one lab where it could be done.

“Now we can do seven lakh tests a day and are in a position to export personal protection equipment, where once we used to import,” he said.

He said the lynchpin of economic revival lay not just in technical innovation, rational tax structures but also the ₹110-lakh crore infrastructure package announced earlier by the government that would look at transport and infrastructure in a multi-modal way.

He also announced optical fibre connectivity for all villages in India in the next 1,000 days as education and other services had gone digital during the pandemic.

Referring to the recent Bhoomi poojan for Ram Temple in Ayodhya, Prime Minister Modi said “the calm and sense of harmony displayed by the people across the country was unprecedented” and that it was this spirit that would lead to the development of the country.

The major chunk of the speech was related to the concept of self-reliance as articulated by his government, which, Prime Minister Modi said was not just “Make in India” but to also “Make for the World”.

He mentioned that for this leveraging of human resources was important, especially, the women. He announced that his government would be reconsidering the mandated minimum age of marriage for women.