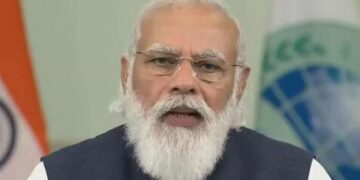 Indian Prime Minister Narendra  Modi has said that recognition of the Taliban regime in Afghanistan will have to await formation of an inclusive government and such a government will have to include all ethnic groups and women.

In a speech at the Afghanistan-themed outreach summit between the Shanghai Cooperation Organisation (SCO) and the Collective Security Treaty Organization (CSTO), Modi stated that the neighbors of Afghanistan would be seriously impacted by the developments in that country.

The political change in Afghanistan did not lead to an inclusive system and the process was not conducted through negotiation, said Prime Minister Narendra Modi in his first extensive comments since the Taliban overthrew the government of President Ashraf Ghani.

“The first issue is that the change of authority in Afghanistan was not inclusive and this happened without negotiation. This raises questions on the prospects of recognition of the new system.

“Representation of all sections of Afghans, including women and the minorities, is important. And that is why it is necessary that the global community should think carefully and collectively while deciding on the legitimacy of the new political system in Afghanistan,” he said speaking in Hindi.

He expressed India’s support for the “central role” of the United Nations in the global deliberation regarding the current system in Afghanistan.

The Taliban has declared an “interim government” in Kabul but India has not yet recognized that set-up.

Modi said the SCO members have been dealing with terrorism and that was why they should ensure that the territory of Afghanistan was not used to export terrorism. “Terrorist and extremist ideologies will receive encouragement if Afghanistan continues to remain unstable and in the grip of fundamentalist forces.”

He highlighted that a “large number of advanced weapons” were left behind by western powers in Afghanistan, and cautioned that the country could emerge as the source of uncontrolled flow of drugs, illegal weapons and human trafficking.

To deal with the fallout of the volatile situation in Afghanistan, he urged the SCO member-countries to frame a “code of conduct” to stop terror financing and cross-border terrorism.

“The SCO member-countries should adopt strong and common norms to deal with the matter. These norms can be used in future for global anti-terror cooperation and can form a template for that,” he pointed out.

Earlier, addressing the 21st meeting of the Council of Heads of State of the Shanghai Cooperation Organisation (SCO), he stated that the fight against radicalization was necessary for increasing trust among the SCO member-countries.

Modi, who was addressing the meeting in the virtual format, said: “The biggest challenges in this region are related to peace, security and trust deficit and the main reason behind these challenges lies in the increasing radicalization. The recent developments in Afghanistan have highlighted the challenge. The SCO should take the initiative to counter this problem”.

The Prime Minister stressed upon the importance of moderate Islam in Central Asia and urged the member- countries to counter religious extremism and radicalization.

“Historically, this region has been a fortress of progressive and moderate cultural traditions. Sufi order prospered here for centuries. This tradition grew here and was spread across the world. Based on this historic heritage of Central Asia, the SCO should develop a common template to fight radicalisation and extremism,” he asserted. Radicalization and extremism has been a barrier to development in the region and urged the member-countries to promote “rational thinking”.

Modi praised the counter-terror work that had been carried out by the RATS mechanism of the SCO. He remarked that India expected to receive cooperation from the SCO members on the suggestions that it had made at the Regional Anti-Terrorism Structure (RATS), which is headquartered in Tashkent.

India’s investment in the Iranian port of Chabahar and the International North-South Corridor was indicative of its commitment to increasing the connectivity with the Central Asian region. “We believe the landlocked Central Asian countries can benefit immensely by connecting with the huge market of India,” he added.

The meeting, being hosted by Tajikistan, also saw the inclusion of Iran as a new member of the SCO. Mr. Modi welcomed the move. He commended the step to include Saudi Arabia, Egypt and Qatar as new dialogue partners of the regional organization.

Pakistan President Imran Khan reiterated that his country suffered from the problem of terrorism for decades. “For decades, Pakistan has suffered from terrorism that was planned, supported, financed and orchestrated by state entities from across our border.”

About the Taliban, Khan said that it must fulfil the promise of building an inclusive government. “This is vital for Afghanistan’s stability. Also, it is important to ensure respect for the rights of all Afghans, and ensure that Afghanistan is never again a safe haven for terrorists,” he remarked.

In an indirect reference to India’s abrogation of Article 370, he stated “unilateral and illegal measures to change the status of disputed territories in violation of Security Council resolutions” did not help regional peace and security. “Settlement of outstanding disputes is a necessary condition for peace, and indispensable for creating an environment of cooperation,” he added.