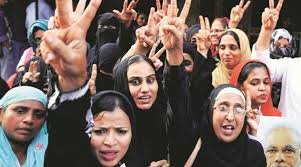 New Delhi, February 3 (The Hindu): The Indian government has effectively given up on at least two of its more controversial legislation — the Citizenship Amendment Bill and the Triple Talaq Bill — which were awaiting consideration by the Rajya Sabha, after opposition parties made clear that they could not guarantee smooth functioning of the House if any contentious bills were tabled.

With the numbers stacked against the government on both the contentious issues in the Upper House, the two bills, which had been cleared by the Lok Sabha in the last session, would now lapse once the 16th Lok Sabha’s term ends.

The decision on the bills to be tabled in the Upper House was taken at a meeting chaired by Rajya Sabha Chairman M. Venkaiah Naidu that included government representatives and leaders of all the opposition parties. The meeting saw Mr. Naidu make an appeal that since it was the last session before the general elections, a sincere effort ought to be made by all to ensure proper functioning of the House in order to send out the right message, said sources, who spoke on condition of anonymity.

The Rajya Sabha is likely to discuss the Motion of Thanks to the President between February 4-6, the Budget on February 7 and 11, and take up the agreed upon legislation during February 12-13. February 8 is meant for Private Members’ Bills with the next two days being weekend holidays.