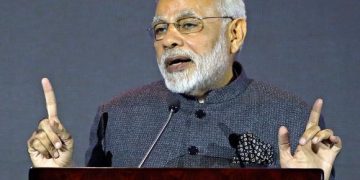 New Delhi, April 22 (Indian Express): In a strongly worded statement to BJP lawmakers who resort to foot-in-mouth remarks, Prime Minister Narendra Modi on Sunday asked them to avoid making controversial statements before the media, which, in turn, boomerangs to hurt the party as well as one’s image. While interacting with BJP MPs and MLAs through the NaMo App, Modi said party members should not always blame the media for blowing things out of proportion since it was them who provide “masala” to the press.

“We commit mistakes and give masala to media. The moment we see a cameraperson, we jump to make a statement as if we are great social scientists or intellectuals. Then these ill-informed statements are used by media and the party’s image takes a beating. It is not the media’s fault,” Modi said. The PM’s rebuke comes amid a series of off-the-cuff remarks made by party motormouths in recent times.

Last week, Tripura Chief Minister Biplab Deb became the toast of social media after he claimed that Internet was not gifted to mankind by the US and it was invented lakhs of years ago and the knowledge of satellite communication existed during the period of Mahabharata. In January, Union minister Satyapal Singh claimed that Charles Darwin’s theory of evolution was “scientifically wrong” and suggested that it be removed from school and college curriculum.  However, it seems the PM’s message did not reach Union Minister Santosh Gangwar. While commenting on the Kathua gang rape case, Gangwar on Sunday said in a country as big as India people should not make an issue out of one or two rape incidents.

In what seemed a reference to two BJP ministers’ comments on the Kathua rape case, Modi also asked legislators to apply restraint before commenting on sensitive issues. “If everyone starts giving opinions then the main issue gets deflected and harms the party and personal image. Specific people have been appointed to reply on issues,” the PM said. Citing an example, the PM said following the Lok Sabha elections, there were 8-10 MPs who used to make offhand remarks, but after he spoke to them, they have stopped making controversial statements.

While commenting on the Kathua gang rape case, Gangwar on Sunday said in a country as big as India people should not make an issue out of one or two rape incidents. (File)

Under attack from the opposition over rising cases of Dalit atrocities, Modi underlined the support the BJP had received from backward sections of the society. He said the party had the maximum number of elected lawmakers from OBC, Dalit and Tribal communities, and asserted that its reach was no longer confined to a particular class, urban centres or north India. “The perception about the BJP that it was a party of a particular class and urban centres or north India has changed and it has emerged as an ‘all-touching and all-inclusive’ organisation,” the PM said.

Appreciating the work of the BJP MPs and MLAs at the grassroot level, Modi said his government was focusing on education for children, opportunities for youth and healthcare for the elderly. He also asked all the party MLAs to undertake at least one developmental work for villages under them, while directing MPs to increase their Twitter followers to atleast 3 lakh.

During the one hour-long interaction, the PM said 11 crore people had already benefited from the Mudra Yojana scheme. “Women in self-help groups are coming up with new employment opportunities in various sectors,” he said, while lauding BJP workers for the “Gram Swaraj Abhiyan” being held from April 14 to May 5.

The PM also shared his views on the recently launched Ayushman Bharat scheme. “The government wants to establish wellness centers for villages, so that people can avail the best healthcare facilities. The government is focusing on education to children, opportunities for youth and medicine for elderly,” he said. Speaking on agriculture, he said many farmers were unaware of a number of agricultural facts and schemes and that there was a need to organzse campaigns to educate them.