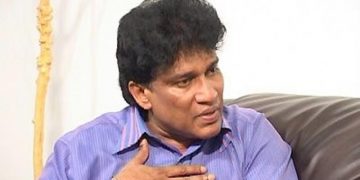 Colombo, July 19 (newsin.asia): The Sri Lankan Minister of National Integration, Official Languages and Hindu Religious Affairs Mano Ganeshan, has resolved not to take up issues relating to the rights of the Tamils of the Northern and Eastern Provinces in Sri Lanka unless he receives a written request to do so.

He said in a statement issued on Friday that he will restrict himself to the subjects assigned to him as Minister.

The announcement followed an incident on Thursday, when Tamil MPs belonging to parties other than his own, absented themselves from a meeting which he had arranged with President Maithripala Sirisena to discuss an explosive Hindu-Buddhist dispute at Kanniya in Trincomalee district in the Eastern Province.

Allegedly under instructions from President Sirisena, the Department of Archaeology had started excavating a site for an ancient Buddhist Stupa by destroying an existing popular Hindu temple for Lord Ganesha there. This led to a protest demonstration by over 2000 Hindus. This was countered by a large group of Buddhists. But a clash was prevented by the Hindu religious leader Agathiya Adigalar and an official of the Chinmaya Mission in Jaffna.

In his speech appealing for restraint,  Agathiya Adigalar pointed out that no political leader or civil society group had taken up the Tamils cause in this regard and asked people to fight for the Tamils’ rights peacefully.

However, Minister Mano Ganeshan did take up the cause, though he was not from the North and East but from Colombo.He represents the Indian-Origin Tamils living in Colombo and in the plantation areas of the Central Province. It was he who organized a meeting of all Tamil MPs with President Sirisena on Thursday.

The meeting was to start at 11.30 am, but since MPs from the various parties other than his own had not turned up, Ganeshan requested the President to give another half an hour. The President graciously oblighed.

“The President waited till 12. We then had no option but to start the meeting,” Ganeshan said in his statement.

He said he heard that some MPs like Arumugan Thondaman were overseas. Some excused themselves on one ground or the other, and the rest did not respond at all. Finally only Tamil Progressive Alliance MPs Thilakaraj, Velukumar, Palani Thigambaram and Tamil National Alliance rebel MP Vyalendran participated. The Ceylon Workers’ Congress and the Tamil National Alliance were not represented.

Ganeshan said that he does not want to blow up the issue of absences but added that it is regrettable that the Tamils have not sunk their partisan differences and acted in concert to fight for their common demands.

He recalled out that he had suggested three years ago that the Tamils should unite and fight for their rights taking a leaf from the Muslims’ book, who unite when their community is under threat.

Ganeshan said that Tamil unity is necessary because there is little hope that the government will carry out its promise to enact a new constitution to guarantee the rights of the Tamils.

According to political circles partisan politics and turf war had been responsible for the absence of the MPs. While the Ceylon Workers’ Congress led by Arumugan Thondaman stayed away because the Tamil Progressive Alliance is its rival in the Central Province, the TNA and other Tamil parties are opposed to Ganeshan or any Indian origin politician getting a foothold in the North and East, the home of indigenous Sri Lankan Tamils who they represent.

Despite the absence of most Tamil MPs, President Sirisena promised to stop the excavation at the controversial site in Kanniya, and agreed to appoint five Tamil archaeologists to the existing all-Sinhalese Archeological Advisory Council and to instruct the department not to undertake excavations in the North and East without the consent of the Tamil archaeologists. He also denied that he had ordered the Archaeological Department to erect a Stupa on the controversial site.

However, given the all too evident disunity among the Tamil MPs, political circles doubt if the President or the department will be sufficiently motivated to deliver on the promises.