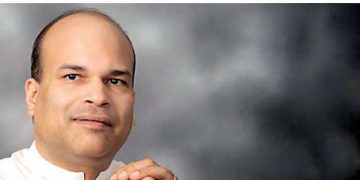 Milinda Moragoda tipped to be Lankan envoy in New Delhi

Milinda Moragoda tipped to be Lankan envoy in New Delhi

Dr.V.K.Valsan is to be Sri Lanka’s Deputy High Commissioner in South India, based in Chennai

The President attaches great importance to relations with India as good relations with the giant neighbor is necessary for prosperity and peace in Sri Lanka. It is learnt that Moragoda, who belongs to the President’s inner circle, will continue to be of assistance to the President. He could be given cabinet rank and given the power to function from both New Delhi and Colombo.

Moragoda is to appear before the High Posts Committee of the Sri Lankan parliament, the sanction of which is mandatory for posts of Ambassador’s rank.

A 1964-born politician and businessman, Moragoda has a fund of experience as an international negotiator and as a Cabinet Minister. He was a Member of Parliament from 2001 to 2010. He served as the Minister of Justice and Law Reform (2009-2010), Minister of Tourism (2007–2009); Minister for Economic Reform, Science and Technology and Deputy Minister for Plan Implementation and Development (2002–2004). His last political post was that of Opposition Leader in the Colombo Municipal Council and Senior Adviser to former President Mahinda Rajapaksa.

He was a key interlocutor during the Norway-facilitated Peace Process involving the Sri Lankan government and the Liberation Tigers of Tamil Eelam (LTTE) between 2002 and 2004. He is the founder of Pathfinder Foundation, a Colombo-based think tank which is linked to leading think tanks in India, China and other countries.

Moragoda has served as a member of the Commission on Legal Empowerment of the Poor, which was co-chaired by Madeleine Albright and Hernando de Soto. He has founded a number of non-profit organizations. Among them is the Milinda Moragoda Institute for People’s Empowerment, under whose aegis operates a humanitarian de-mining program in the war-devastated North and East of Sri Lanka, and Apeksha, a free English Education Program for children of low income families.

The Order of Rio Branco was conferred on Moragoda by the Government of Brazil for services he rendered to Brazil as Honorary Consul for Brazil (1990–2004). In 1999 the World Economic Forum, based in Geneva, nominated Moragoda to serve as a Global Leader of Tomorrow (2000-2005). They again selected him to serve as a member of the newly created group of Young Global Leaders in 2005.

Forthright on matters of public policy Moragoda has written against the continuance of the Provincial Councils system which he feels has not delivered the goods. He is also for the strengthening of the Executive Presidency, as, in his view, a strong Presidency is key to rapid development.