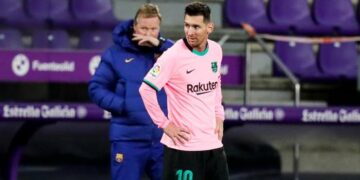 January 31 (Goal) – Lionel Messi’s Barcelona contract is the biggest in the history of sport, landing the superstar forward more than €555million over four years.

That is the astonishing claim made by El Mundo, with the Spanish newspaper reporting on Sunday that it had obtained details of the deal signed by the 33-year-old in 2017.

The mega-money agreement, which expires in June this year, would see Messi receive up to €555,237,619 across four seasons, providing a number of conditions are met.

Messi was at the centre of a major transfer storm when he attempted to force a move away from Camp Nou last August, but was left frustrated when Barca refused to sanction an exit.

Amid a fraught presidential election campaign, it has remained apparent that all is not well at the Catalan club, whose financial worries are cast in a fresh light after El Mundo’s stunning front-page revelations, with the outlet claiming to have laid hands on a copy of “the most sought-after document”.

In addition to annual earnings in excess of €138m – dependent on some variables – the report says Messi received a renewal fee of over €115m, and a loyalty bonus just shy of €78m.

The Argentina international, who also rakes in millions in image rights, is said to have earned more than €500m from the eye-watering deal so far.

Barca’s accounts for the 2019-20 season showed gross debt had reached €820m, with the coronavirus pandemic having further dented their outlook.

Against the backdrop of those financial woes, Messi’s desire to leave, and with a fractious presidential election not due to be concluded until March, Barca are still off the pace in LaLiga despite a run of four consecutive top-flight wins.

Ronald Koeman’s side are 10 points behind leaders Atletico Madrid ahead of Sunday’s visit of Athletic Bilbao.

Messi, who was red carded for the first time in his career earlier this month, has contributed 15 goals in all competitions.