The most memorable social moments from 2016 Olympics

The most memorable social moments from 2016 Olympics

Aug 22 – Rio wasn’t a big disaster like many had predicted. But it came packed with thrills and controversies that got people talking.

The games in Rio shattered several records and introduced a new generation of Olympic stars like Simone Biles, Katie Ledecky and Fu Yuanhi. Here’s a look back at some of those triumphant moments as well as the bizarre ones.
Well Oiled The opening ceremony introduced us to Tonga’s flag bearer, Pita Taufatofua who made quite the entry with his well-lacquered torso.
Ticked off 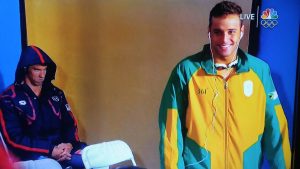 Michael Phelps stared down South African rival Chad le Clos, whom he ended up defeating. The steely glare gave birth to meme #Phelpsface.
Dominant
Simone Biles proved unstoppable in Rio. She led her US teammates to a gold for team and took home five medals including the women’s individual all-around. Her accomplishments and her fun-filled social media adventures won her tons of accolade.
Just Green The Olympic diving pool turned a mysterious shade of green, sending puzzled Twitter users into a frenzy. What was going on in that pool?
Team GB’s diving star Tom Daley wondered, “what happened?”
Officials said that algae was to blame, and that there was no need to worry as the water quality “was tested and there were no risks for the athletes.” Alrighty then.
Expressive Chinese swimmer Fu Yuanhi, delighted the Internet by pulling a series of funny face to express how happy she was at securing a bronze medal in the women’s 100m backstroke.
Fu became an overnight sensation in China after her exuberant — and at times hilarious — answers in post-competition interviews on state television. She also broke a taboo by talking about her period.
Pumped
Leslie Jones scored an invite to the Olympics after delighting Twitter with her very quotable commentary. NBC brought the actress and comedian to join their broadcast efforts.
Empty
Empty seats could be seen at many Olympic venues, most notably at the track and field stadium. Although organizers offered some explanations, the #emptyseats issue persisted throughout the Games.
Helpful 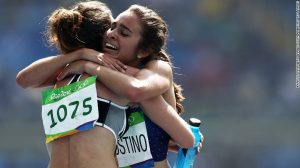 When New Zealand runner Nikki Hamblin competed in the 5,000 meters race, she stumbled and fell, accidentally tripping Abbey D’Agostino of the US. They helped each other up and the American was later taken away in a wheelchair. But the sportsmanship displayed by the two runners proved memorable.
Mature
Kids who grew up idolizing Michael Phelps ended up becoming their own stars.
Katie Ledecky, 19, broke a few records and took home five medals. She got a photo taken with Phelps when she was 10 years old. This time around, it was Phelps getting her autograph. Singapore’s Joseph Schooling beat his childhood idol, Phelps, in the 100-meter butterfly, becoming the first Singaporean athlete to win a gold in the Games. Flashback to the time he was just a kid lining up to get Phelps’ autograph.
Immature
The strange saga of Ryan Lochte continued long after he flew back to the US. Two of his teammates were pulled off a plane bound for the United States for further questioning as Brazilian authorities found several inconsistencies in Lochte’s story.
Later, Lochte attributed his fabrication about a robbery to “immature behavior” and said he was “110% sorry.” Social media was not so forgiving.
Reviled
Another Olympics, another flurry of criticism for NBC.
Blasted for being sexist, archaic and reliant on tape delay and packages, viewers tuned out of NBC’s primetime coverage of the Olympics. The Olympics are still clearly must-see TV for a wide swath of the United States, but NBC saw weaker ratings as the Olympic winded down.
Delightful
Before we say goodbye to Rio, Japan’s Prime Minister Shinzo Abe wanted to remind you where the next summer games will be.
Abe made an epic entry popping out of a Super Mario green pipe dressed as the video game character to tell you to tune in for Tokyo 2020.
-CNN
ADVERTISEMENT

IPL media rights for next five seasons sold for $6.2 billion