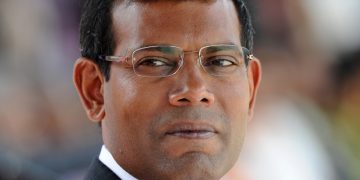 London, February 6 (newsin.asia) The Maldivian opposition leader and former President Mohamed Nasheed has “humbly requested” India to send a special envoy to the Maldives “backed by its military” to rein in the Maldivian government headed by President Abdulla Yameen which has quashed all democratic rights to keep itself in power.

“On behalf of the Maldivian people we humbly request: 1. India to send envoy, backed by its military, to release judges & pol. detainees inc. Prez. Gayoom. We request a physical presence. 2. The US to stop all financial transactions of Maldives regime leaders going through US banks,” Nasheed tweeted on Tuesday.

Meanwhile, on Tuesday, President Yameen amended his Declaration of a State of Emergency  to suspend Article 48 of the constitution which specifies the rights on arrest or detention.

Art 48 on Rights on arrest or detention ,had guaranteed:

(a) to be informed immediately of the reasons therefore, and in writing within at least twenty four hours;

(b) to retain and instruct legal counsel without delay and to be informed of this right, and to have access to legal counsel facilitated until the conclusion of the matter for which he is under arrest or detention;

(c) to remain silent, except to establish identity, and to be informed of this right;

(d) to be brought within twenty four hours before a Judge, who has power to determine the validity of the detention, to release the person with or without conditions, or to order the continued detention of the accused.