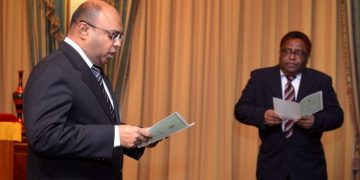 Male, April 25 (AVAS): The Maldives Supreme Court on Wednesday cited the doctrine of necessity to back a controversial amendment to the Judges’ Act passed by parliament largely scripted to remove the two Supreme Court  judges accused of being in a plot to overthrow the Abdulla Yameen government.

Three opposition MPs had filed a challenge at the Supreme Court citing lack of parliament quorum to pass the law.

The Court in its verdict agreed that the parliament had lacked the necessary number of lawmakers to pass the law but but cited ‘doctrine of necessity’ and said there there were no grounds to repeal the law.

According to the amendment, judges convicted of a criminal offence would be automatically removed from office.

The amendment said a judge convicted of a criminal offence would be removed with immediate effect after the sentence. The amendment was also designed to bypass the constitutional article on removal of judges arguing that it does not relate to the conduct of judges.

The amendment said the Judicial Service Commission (JSC) must suspend the judge with pay following his or her arrest. However, once the judge is formally charged, he or she would cease to receive pay.He or she would be immediately removed from office if convicted.

The ruling party in its amendment has also limited the time for appeal. A convicted judge must file the first appeal within 10 days while the first appellate court is given 30 days to arrive at a sentence. The same time frame has been afforded to the Supreme Court as the last stage of appeal.