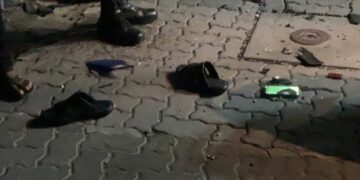 Scene of the explosion

Male, May 6 (newsin.asia): The Speaker of the Maldivian parliament and former Maldivian President Mohamed Nasheed was injured in a bomb explosion on Thursday evening as he was trying to board his car outside his residence at Neeloafaru Mugu in Malé City. The explosion occurred at 2020 hrs local time.

The Maldivian police tweeted to say: “Following an explosion in Neeloafaru Magu in Malé, Speaker of Parliament President Mohamed Nasheed has sustained injuries and is currently receiving treatment at ADK Hospital.”

“Police are currently active on the scene and we urge the public to refrain from going to that area for the time being. We will keep updating the public,” another tweet from the police said.

According to information received by ‘The Times of Addu’, an explosive device inside a motorcycle had exploded injuring Nasheed and his bodyguard. Armed military officers were seen at the blast scene in Malé City

Nasheed and his bodyguard were rushed to ADK hospital. But the details of injuries were not known immediately. He was wheeled into the operation theater of ADK hospital.

President Ibrahim Solih said that it was a “direct assassination attempt” and called out all authorities to investigate the matter as soon as possible and bring the culprits to book.

In a statement on Twitter, he said: “Cowardly attacks like these have no place in our society. My thoughts and prayers are with President Nasheed and others injured in this attack, as well as their families.”

Indian Foreign Minister Dr.S.Jaishankar tweeted to say: “Deeply concerned at the attack on Speaker @MohamedNasheed. Wish him a speedy recovery. Know that he will never be intimidated.”

Former President Maumoon Abdul Gayoom tweeted: “I do hope and pray that Raees Nasheed is unhurt and well. I condemn in the strongest terms all acts of violence and terrorism.”

Another Former President Mohamed Waheed said in his tweet: “I strongly, wholeheartedly condemn the attack aimed at my running mate & predecessor @MohamedNasheed. The propagation of hate in Maldivian politics must end, & we must find ways to unite & work together, rather than divide. My prayers are with him, the SPG, & their families.”

The explosion took place on Thursday as Nasheed, 53, was getting into his car in the capital Male, an official from his Maldivian Democratic Party (MDP), told AFP news agency by telephone.

“It looks like some sort of an improvised explosive device, possibly rigged up to a parked motorcycle,” the official said adding that an investigation was underway.

Nasheed has been a controversial political figure whose statements have often provoked radical Islamists. Recently, he had also proposed that the Maldivian constitution be changed to the parliamentary system in place of the Presidential system and that he be appointed Prime Minister with full powers.

He became the country’s first democratically elected president after winning the first multiparty elections in 2008.  He was toppled in a coup in 2012 and was unable to contest the 2018 presidential elections after he was convicted of criminal charges.

However, he returned to the country from self-imposed exile after his party won the 2018 presidential elections and then entered parliament.

This is not the first attempt on the life of a Maldivian leader. Former President Abdulla Yameen had also escaped from a blast. There had been explosions set off during the regime of President Waheed also. The most well known was in a public park in Male in 2007. The bombing took place on September 29, 2007 in Sultan Park near the Islamic Centre in the Maldivian capital injuring 12 foreign tourists. “”