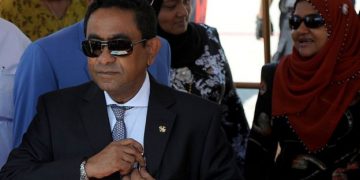 Maldivian President tried to prevent Nasheed from participating in talks

Maldivian President tried to prevent Nasheed from participating in talks Male, October 13 (NIA): The opposition Maldivian Democratic Party (MDP) has accused President Abdulla Yameen of  trying to  prevent opposition leader Mohammad Nasheed from participating in the proposed talks with the government on settling the national question.

The MDP said in a release on Wednesday that it was “deeply concerned by the government’s clear attempts to obstruct the UN- mediated Talks.”

The release further said: “Following the Commonwealth Ministerial Action Group’s decision to place the Maldives on its formal agenda, in September, the MDP welcomed the CMAG stipulations and urged the government to immediately engage in political dialogue with all stakeholders to resolve the on-going political crisis.
However, a series of letters from the President’s Office, show deliberate efforts to complicate the process by overstepping its mandate and dictating preconditions before the Talks have even convened.”

“On October 4, the President’s Office sent a letter to all parties saying that the names of the party representatives at the Talks should be endorsed by its ‘council.’  On October 10, the President’s Office sent a second letter to the MDP saying that the President is concerned about the decisions taken by the MDP; MDP’s representatives at the all- party dialogue must be selected by the council, and that the government will not accept a nominee, if the person is currently serving a sentence.”

“These letters show the Government trying to tightly control who will be allowed to participate in the Talks, and primarily to obstruct the participation of (former President) Nasheed. This is particularly remarkable, given that MDP has as yet not communicated who will be representing the party at the Talks. The MDP finds this turnaround by the Government astonishing, given that, on the day the CMAG decision was released, the government had announced that it did not have any preconditions.”

“The MDP cannot accept the Government of the Maldives dictating such preconditions to the political dialogue. The MDP believes the Government is deliberately overstepping its mandate in an attempt to frustrate this party and other opposition parties to withdraw support from the talks. This is a clear attempt to undermine the UN- mediated talks.”

The MDP however, reiterated its firm commitment to UN- mediated political dialogue.